Report: It takes over N1 million to move a container from Apapa to Lagos mainland or it stays trapped 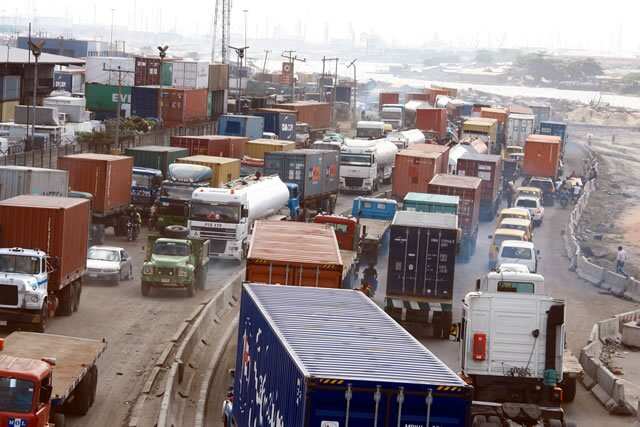 A Financial Times of London report titled ‘Nigeria’s port crisis’ has revealed that transporting a container cargo from Apapa seaport in to any part of Lagos mainland, a 20km trip, costs about $4,000(over N1.5 million). This is almost same amount to ship a 40ft container from Shanghai to Lagos according to the Shanghai Containerised Freight Data index.

The report noted that the difficulty has made the output nearly impossible to meet the demands of Nigeria’s population which has tripled overtime.

Players in the industry speaks. Muda Yusuf, former Director-General of the Lagos Chamber of Commerce and Industry (LCCI) told the FT that the government has been talking about the ease of doing business but if there’s one sector we have not felt the government’s effort, it’s in the ports where practically nothing has changed.

Also Kunle Falerin, Chairman of the Nigerian Ports Consultative Council on his part attributed the outrageous intrastate fares to economic slump caused by COVID-19 pandemic, while speaking with the outlet. He listed other contributing factors to include overcrowding or port congestion, ageing infrastructure, poor rail network and lack of automated procedures.

Finding a solution to the painful way,  a senior executive at a logistics company was also quoted by Financial Times that importers have devised a means to bypass the delay by paying spot prices to fleet operators who charge about N1.5 million to transport a 40ft container from Tin Can to warehouses on the Lagos mainland.

These sharp witted importers would rather pay the high fares than risk their cargoes sitting idly at the coast, waiting to be allowed entry to the docks while accruing exorbitant storage charges. The senior executive added: “These charges influence the outrageous hike in prices of imported goods which deepens the suffering of the common man, the consumer who purchases the products.”

What other countries are doing. In a recent interview Akinwumi Adesina, president, African Development Bank (AfDB) called on decongestion of Nigeria seaport.

He said: “the leading ports for West Africa are in Cote d’Ivoire, Ghana, Togo, and the Benin Republic. All these countries have modernised their port management systems, leaving Nigeria far behind”

“Government must start with cleaning up administrative bottlenecks, most of which are unnecessary with multiple government agencies at the ports, high transaction costs or even plain extortions from illegal taxes, which do not go into the coffers of the governm ent.”

Culled from Marine and Petroleum Nigeria