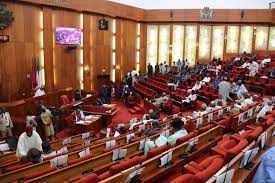 A Bill for an Act to repeal the Electricity Power Sector Reform Act 2005 passed through its second reading at upper legislative house, the senate on Tuesday.

Sen. Gabriel Suswan (PDP-Benue) who presented the lead debate on general principles of the bill said that the bill seeks among other reasons to repeal the Electric Power Sector Reform Act 2005.

According to him, the bill also seeks to consolidate all legislations in Nigerian Electricity Supply Industry (NESI) and enact an omnibus electricity act for the industry to provide the ideal legal and institutional framework that would guide the post-privatisation phase of the industry in Nigeria.

It also seeks to provide the framework that would attract more investors to leverage on the modest gains of the privatised electricity industry in Nigeria to accelerate growth in power incapacity and improve generation of power through increased investment in new technologies.

This, he said would enhance transmission and distribution of power generated and minimise aggregate value chain loses.

The Senator said, in spite of the modest milestones recorded in the Nigerian power sector, the sector has not been able to make electricity available to 75 per cent rural population as envisaged in the National Electric Power Policy.

“This is because the sector is currently plagued with a number of challenges some of which are operational constraints that emerged after the privatisation exercise.

“While others may be attributed to the gaps inherent in the extant statutory framework,” he explained.

He said that the privatised power sector in Nigeria was facing a myriad of post-privatisation challenges including the absence of tariffs, inadequate enumeration, metering of consumers, limited access to funds for investment.

Other challenges according to him include high levels of Aggregate Technical Commercial and Collection (ATC &C) losses and poor revenue generation.

“All these constraints have received various interventions by the executive and legislative arms of the federal government over the years.

“But these challenges have continued to threaten the viability of successor companies including their financial capacity to invest in network improvement to guarantee reliable power supply as envisaged in their respective Performance Agreement.”

He said that apart from the operational constraints confronting the post-privatised power sector in Nigeria, the principal act which was the extant legal framework for the industry has some gaps and shortcomings that made it unsuitable to adequately govern activities of the market operator and market participants.

He said that the bill, when passed would provide the framework for power diversification through the use of cleaner renewable energy sources.

“The bill will also eliminate current barriers to private sector investment across the power value chain and attract the funds needed to address the current funding gaps confronting the industry since the privatisation of the power sector,”he said.

The bill, after passing second reading was referred to the Committee on Power by President of Senate Ahmad Lawan for further legislative work.

The committee is expected to report back to plenary in four weeks.