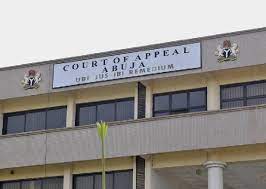 The legal tussle on the national leadership of the All Progressive Grand Alliance (APGA) on Thursday took a new twist with the Court of Appeal in Abuja slamming a N10 million fine on two chieftains of the party for abusing the processes of the court in the matter.

The fine was imposed on the duo as punishment for bringing what the court considered as frivolous and incompetent appeal before it.

The two chieftains are Chiefs Edozie Njoku and Chinedu Benedict Okoro who, in their joint appeal asked the court to resolve dispute on APGA national leadership in which a judgment had earlier been delivered by Kano division of the court.

Justice Jummai Hanatu Sankey in a ruling on the appeal held that the Court of Appeal in Abuja has no jurisdiction to entertain the appeal on the strength of the final judgment of its Kano division in respect of the matter.

In a unanimous decision of three justices of the court led by its President, Justice Monica Dongban-Mensem, it was held that the Abuja division of the Court of Appeal was bound to follow the decision of its Kano division.

Justice Sankey said that the appeal of the two APGA chieftains amounted to asking the court to sit on appeal over its own earlier judgment.

“It is a settled law that the Court of Appeal, once it gives final decision on any matter cannot go back to the same issue except where there are typographical errors. The proper place for the two appellants to go to ventilate their views is the Supreme Court and not any division of the Court of Appeal,” she held.

The appellate court then, proceeded to award N10 million fine against the two appellants to be paid to Sylvester Ezeokenwa and APGA who are the first and second respondents respectively in the matter.

The Kano division of the court had on August 10, 2021 resolved APGA national chairmanship dispute in favor of Victor Oye and also upheld the primary election conducted by his leadership which produced former governor of Central Bank of Nigeria (CBN), Professor Charles Chukwuma Soludo as APGA governorship candidate for November 6 gubernatorial election in Anambra state.

Justice Hamma Simon Zamani of the Kano division had in his judgment in Kano, set aside the judgment of a Jigawa State High Court, which had earlier declared Jude Okeke and Chukwuma Umeoji as the APGA’s national chairman and Anambra governorship candidate respectively.

But rather than going to Supreme Court to challenge the Court of Appeal verdict, both Njoku and Okoro moved to Abuja division of the same court with an appeal on the APGA national leadership tussle already resolved by the Kano division of the court.

Justice Jummai Sankey, while delivering ruling on the appeal filed against Ezeokenwa and five others held that the appeal constituted an abuse of court process and that the Abuja division is bound by the judgement of Kano Division delivered on August 10.

The three justices unanimously said the court lacked jurisdiction to entertain the suit, because doing so will amount to sitting on it’s own judgement.