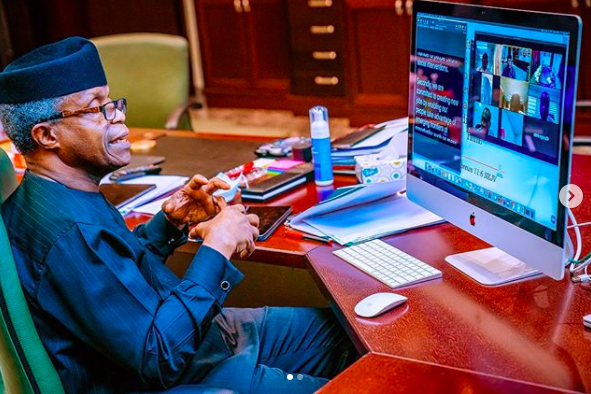 Vice President Yemi Osinbajo, who is the Chairman of NEC, spoke on Tuesday at a validation meeting for HCD Communications Strategy at the State House Banquet Hall, Abuja.

Osinbajo was represented by  Ade Ipaye, Deputy Chief of Staff to the President, Office of the Vice President.

NEC, in recognition, of the critical role HCD plays in driving sustainable economic growth and reducing poverty, had in 2018, set up the Core Working Group (CWG) to design a strategy to improve Nigeria’s HCD indices.

According to the vice president, the first objective of the communication strategy is to ensure that everybody has a shared understanding of HCD programme objectives and its importance to Nigerians.

“Those of us here, right from the governors and ministers to the state commissioners and directors and focal persons, we are the critical people to make sure that we, first, understand the programme and we follow up on the implementation at all levels of government so that we  can really begin to see the effects.

“So, a shared understanding is the first objective of this meeting.’’

He said that secondly, there should be a sense of ownership among the key stakeholders.

Osinbajo said that a common understanding and objective would enhance sense of ownership.

“Third is the co-creation of a strong and positive brand identity for the HCD programme.

“ I made the point earlier that it is not enough to make all these grand plans and even try to implement them; we must let the ripple spread; we must get other people to know that this is happening; to know that these are the benefits for our people in making this happen and then, to get them to come along with us in making it happen.

“ So, we therefore need a strong and positive brand identity for the programme which will inspire others to join in its objectives and its implementation.’’

The vice president said that another objective was to streamline HCD communication activities to people at areas of most impact.

According to him, Nigeria is a large federation of diverse ethnic groups; diverse geography, diverse customs and others.

“So, we don’t want a one-side-fix-all communication strategy approach. We need to have each sector, each group represented or seeing itself, represented in this strategy.

“It is not a strategy designed for the North or for the West or the East; all of the nuances must be recognised and integrated in what we are presenting to the Nigerian public,’’ he said.

He said that finally, there was need to create a monitoring and evaluation framework that would be widely understood by users of the programme.

Osinbajo said that there must be a common understanding of what should be regarded as success.

In his remarks, Gov. Nasir El-Rufai of Kaduna State, who represents the North West zone in the HCD Council, regretted that the region had high rate of out-of-school children and poverty.

The governor said the human capital indices in the region had been worsened by banditry and other crimes.

He commended the vice president for providing the political will needed to improve the human capital indices in the country.

“The bandits we arrest have never gone to school; they have no notion of religion; either Christianity or Islam and they have no hope.

“If we don’t invest in education, healthcare, nutrition and security, our situation will just get worse.

“This is why I must pay compliments to the vice president for being at the lead in getting the political attention needed to address this challenge.

“It is all about political will, ladies and gentlemen; we have spoken here; there is a clear strategy; we all talk about implementation.

“If we all agree that HCD is actually so important, why are we so backward? Why are state governments not budgeting at least 25 per cent, 26 per cent for education and 15 per cent for healthcare as recommended by UN agencies,’’ he asked.

He said that until political leaders realised the imperative of taking critical decisions in the core areas, there would be no progress.

In a goodwill message, a representative of the World Bank, Tekebe Belay, said that human capital was one of Nigeria’s greatest assets.

The meeting was attended by deputy governors, members of the National Assembly, members of the Federal Executive Council, youth and women leaders and development partners among others.(NAN)