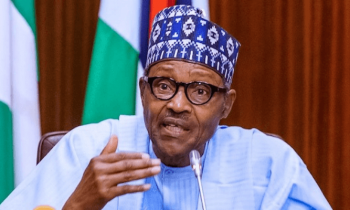 President Muhammadu Buhari has requested from the Senate to remove the former Director of Petroleum Resources, Sarki Auwalu, as one of the nominees to the board of the Nigerian Midstream and Downstream Petroleum Regulatory Authority (NPRA).

Sarki Auwalu was proposed to be the Chief Executive Officer of the Authority. He is now to be replaced by Farouk A. Ahmed who served the Nigerian National Petroleum Corporation (NNPC)for 34 years. He is a highly experienced downstream technocrat and one time executive secretary of the Petroleum Products Pricing Regulatory Authority (PPPRA) and currently a non executive director at Eterna Oil Plc.

The request was contained in a letter dated September 28, 2021, and read by the Senate President, Ahmad Lawan, during plenary on Wednesday.

The President in a previous letter dated September 16, 2021, had requested the upper chamber to confirm Auwalu alongside three others as board members of the Nigerian Midstream and Downstream Petroleum Regulatory Authority.

However, President Buhari, in his new request received by the upper chamber,sought the replacement of Sarki Auwalu with Engr. Farouk A. Ahmed as Chief Executive Officer.

He explained that the replacement request was duly in accordance with the provision of Section 34(3) of the Petroleum Industry Act 2021.

The President did give not reasons for his replacement, but industry sources said that it is likely that recent developments in the industry, especially the ignoble role played by the DPR under his watch during the marginal bid licensing round may have been one of the things responsible for the president’s action.

The marginal bid round conducted under him as a director is said to be the worse exercise in the history of bid rounds in Nigeria.

It lacks transparency to say the least according to industry watchers that were following the exercise with keen interest. The exercise is said to have further heighten the perception of Nigeria by international investors as a highly corrupt country.

The government, through the Department of Petroleum Resources (DPR), launched its first marginal field bid round in almost 20 years. A total of 57 fields, spread across onshore, swamp and shallow water, are on offer. DPR defines a marginal field as a discovered resource that has been left unattended for more than 10 years. These fields remain undeveloped and only a few have been appraised.

The majority of the fields were previously held by Shell, ExxonMobil, Chevron and Total. We estimate total resources on offer of around 800 mmbbl oil and 4.5 tcf gas. The 25 largest oilfields have the potential to unlock $9.4bn of investment over the first five years and generate over $38bn in revenue over the life of the fields.

At the end of the exercise, investors that don’t have anything in common and who were not consulted were merged together as co- owners of one asset or the other.

To make matters worse, no investors has been given any letter of award up till this moment from the DPR.

The order thing that may have been responsible for President’s action, may be the embarrassment the DPR caused the Federal Government by revoking the licenses of the joint venture assets of Nigerian National Petroleum Corporation (NNPC) and Addax Petroleum Company without following due process and for no reason handed it over to another company.

The DPR director is also alleged to have refused the directive from the presidency to reinstate some of the staff of the department he unilaterally sacked claiming that they are redundant staff.

The officials who took their case to court but were persuaded to withdraw it by the presidency are yet to be reinstated.

It  is also believed that he lacks the necessary experience and competence to handle such a strategically important institution like the authority which is just about to be set up given the way and manner he is running the DPR.

Industry watchers say that such a new organization needs beyond just an engineer but technocrats or administrators devoid of political biases but who can lay solid foundation that would sustain the test of time.

←  Withdrawing Investment in Oil Sector May Be Disastrous, OPEC Warns Again Pictures of the donation of dialysis machine with chair, hospital beds & nettings among others, to General Hospital, Marina Lagos by the Nigerian Shippers’ Council →