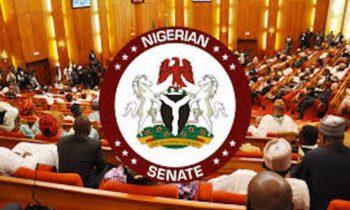 The chairman Senate Committee on Banking, Insurance and other Financial Institutions, Senator Uba Sani, has expressed the displeasure of the  Senate over the non-issuance  of Air Operating Certificate (AOC) to NG Eagle, a new airline promoted by the Asset Management Corporation of Nigeria (AMCON).

The senator  who speak at the Zuma Rock Resort in Niger State, said the Upper Chamber was particularly not happy with the Aviation Ministry whom he accused of frustrating the efforts of AMCON, a government debt resolution agency that has scaled all huddles that are required by law to set up a new airline tagged NG Eagle, but are being denied the final AOC to enable the new airline to commence scheduled operations.

He also directed that AMCON publish the list of defaulting debtors of the agency.

The government agency  had to intervene in Arik Air Limited (“Arik”) in February of 2017  and it was  supported by the Ministry of Aviation  so that the airline would  p collapse, especially one that controlled over 60 per cent of the domestic Air transportation in the country amongst other public concerns. The intervention was necessary at that time for the continued existence of the airline.

AMCON said it was setting up NG Eagle as strategic exit from its aviation portfolio. The concerned airlines owed over N300billion, and all funds injected into the airlines pre, and post receivership have not yielded any positive repayment result. AMCON therefore opted for a strategic exit from its aviation portfolio through NG Eagle, creating an unencumbered and brand-new airline that would be easier to dispose profitably.

He said “This AMCON intervention in Arik and the frustration the agency is going through because of its proposal to set up NG Eagle as best option to recover its investment in the airlines is not supposed to be. I think we are about to lose billions of naira because of ego. The ministry is not being realistic with his proposal of a National Carrier and because of that frustrating the efforts of AMCON on NG Eagle.

“I say it is not realistic after we listened to the explanations of the ministry that the government will own only five percent of the new National Carrier, Nigerians will own 46 percent and yet to be named foreign interest will own 49 percent. So, I think the Executive arm of government will work together with the 9th Senate under this Committee to ensure that the right things are done to enable AMCON recover this huge outstanding N4.4trillion debt.

“It is also on that note that the Senate through this Committee is directing the Management of AMCON led by Ahmed Lawan Kuru, Managing Director/Chief Executive Officer to again publish the full list of AMCON obligors in daily newspapers so that Nigerians will know those that have played leading roles in destroying the economy of this great country.”

In his welcome address, the AMCON Boss explained that “AMCON getting involved in the airline is not from a recovery perspective, but from a national duty perspective to ensure that the airline continued to operate given its strategic importance in the aviation sector at that time.

“After intervention by AMCON, the airline continued to meet its obligations particularly that of the Aviation Ministry. The airline has so far remitted over N12billion as ongoing obligations to the ministry. The Corporation also does realize that at certain point in time it must prepare an exit strategy from all its aviation portfolio, and based on advice, decided to set up NG Eagle through the process of certification by Nigerian Civil Aviation Authority (NCAA).

“It was a very vigorous process that took us more than two years. Ultimately, we were able to meet all the requirements including getting three aircrafts branded (they are currently at the Murtala Muhammed Airport in Lagos, branded as NG Eagle) and ready for operation but we are being frustrated.”

“We are also aware that based on the NCAA Act, the only condition for NCAA to deny anyone a license to operate an airline should be based on safety reasons, which would be investigated and brought to the attention of the applicant for fair hearing. Suddenly we are again being confronted with the challenge through the National Assembly that the license should not be released until AMCON settles Arik debt with NCAA, this we believe is an afterthought.”