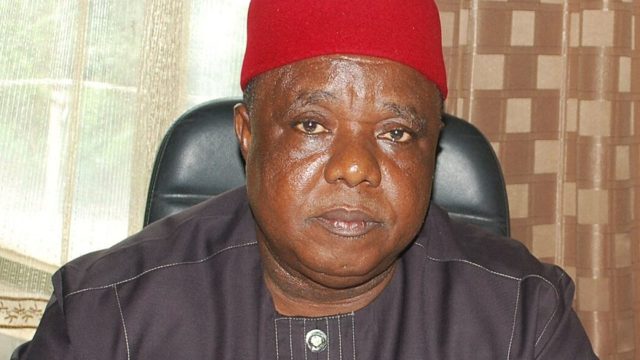 The Revenue Mobilisation, Allocation and Fiscal Commission (RMAFC), on Sunday gave the assurance that a new and acceptable revenue formula that will tackle new development realities in the country will be in place.

Chief Elias Mbam, the Commission’s Chairman, gave the reassurance in an interview with the News Agency of Nigeria (NAN) in Abuja.

He was analysing the successful engagements the commission had with various stakeholders across the country.

He commended Nigerians for their effective participation during the Commission’s Zonal Public Hearing for a new revenue sharing formula.

Chief Mbam reiterated the determination of RMAFC to come out with credible, acceptable and fair new revenue sharing formula for the country.

He said that the Commission would synthesise and analyse the various presentations from stakeholders’ across the six geo-political zones and the Federal Capital Territory.

Mbam, especially, commended the 36 state governors for mobilising the people to massively and effectively participate in this all-important national issue.

Mbam recalled that when President Muhammadu Buhari inaugurated the board of RMAFC on June 27, 2020, he charged the members to be fair and just to all tiers of government in the review of the current revenue allocation formula.

He reiterated the Commission’s commitment not to compromise RMAFC’s constitutional mandate for whatever reasons.

NAN reports that the consensus of the states and the Federal Government at the various zonal public hearing was a reversal of the current sharing formula.

The existing formula gives 52.68 per cent to the Federal Government, the states 26.72 per cent, the local governments, 20.60 per cent, with 13 per cent derivation revenue going to the oil-producing states.

There was, however, no consensus on what the new sharing formula should be, a decision to be taken by RMAFC, which has the constitutional right to do so.

“Development needs to start getting to the local governments for the nation to get fully developed,” he said.

Mustapha stated that the issue of revenue allocation should be handled constructively, especially in the face of dwindling revenue and the need for states to increase their internally-generated revenue (IGR).

“It is an important fact that this review should culminate in improved national development,” the SGF said, adding that the process would culminate in the enactment of an appropriate Act by the National Assembly.

NAN recalls that Mbam at the various zonal public hearings reiterated that the revenue allocation review was not intended to change the fiscal arrangement of the country.

“Whether we are devolving power or going into a complete system of federalism or we are restructuring is not the concern of this review.

“The review of the mobilisation and revenue allocation is a product of law and an Act provided by the 1999 Constitution as amended,’’ he said.

The RMAFC boss explained that the height of responsibility of any of the three tiers of government would determine what it would get.

He said: “If the Federal Government is confirmed to have a high responsibility, it will get an equivalent of that responsibility as allocation.