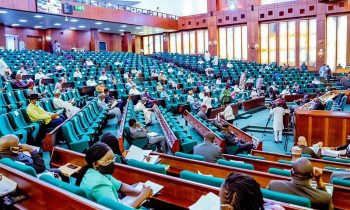 The House of Representatives has called on the Central Bank of Nigeria (CBN) to  prevent default activation of Unstructured Supplementary Service Data (USSD), suggesting that other option such  as voice, eyes and fingerprints should be included.

The House also directed the Nigerian Communications Commission (NCC) to sanction mobile service providers that are engaged in SIM swap fraud in Nigeria.

These were part of the 22 recommendations contained in a report of the Ad-hoc Committee on the increasing incidents of sim swap fraud presented by Abubakar Hassan Fulata (APC,Jigawa) on Wednesday.

Presenting the report, Rep. Abubakar Fulata said the Ad-Hoc Committee met with all the stakeholders and found out that massive theft was carried out by fraudsters in connivance with insiders in the banks and telecommunications networks.

“The Committee also alleged  that telecommunication giant Globalcom refused to participate in the exercise despite  efforts by the Committee to involve them.

The report recommended that, NCC) should as a matter of urgency sanction all Mobile Network Operators (MNOs) whose agents are involved in aiding and abetting SIM Swap Fraud and compel them to adhere strictly to guidelines and to serve as a deterrent to future offenders.

It further recommended that “the NCC grants Mobile Network Operators (MNOs)  a (view-only) access to the SIM Registration Data and Biometrics during SIM Replacement/swap exercise.

“That there is a need for the amendment of the relevant laws particularly the NCC Act 2003 to allow for Biometric SIM Swap and allow MNOs to collect, store and use (view only) customer information during the SIM Swap process”.