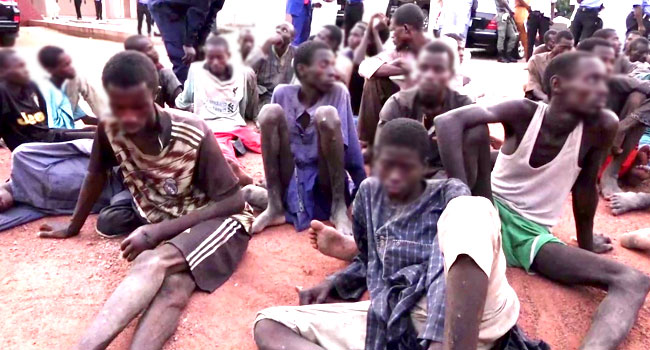 According to the Police Commissioner “Today (Thursday) 187 were rescued as a result of the pressure mounted on these bandits by the state government and other security agencies whereby, we stormed Tsibiri Forest where kidnap victims were kept for various days – some (of them for) 52 days, 48 days, 54 days and four months,” said the Commissioner of Police in Zamfara, Ayuba Elkana, who handed over the victims to the state government.

“They have now been rescued unconditionally. We are now going to hand them over to the state for medical check-up, debriefing, and, later, to be reunited with their families.

Some of those rescued are natives of Gora Namaye, Rini, and Shinkafi in Zamfara while the others are from Sabon Birnin LGA in Sokoto State.

“This is a great achievement, and it goes to all the good people of Zamfara State who have keyed into the resolve to this administration to make sure that Zamfara State is brought back to its normal peaceful state.”

The victims were rescued after an extensive search and rescue operation that lasted for hours, conducted by operatives of the Police Tactical Squad of the command.

Elkana explained that the feat was recorded as a result of the implementation of the new security measures announced by the state government.

As part of the measures, the police and other security agencies have been carrying out assaults on identified bandits’ locations in various parts of the state.

According to the police commissioner, these efforts led to the rescue of hundreds of abducted victims who have been reunited with their respective families.

He revealed that some bandits and their collaborators have been arrested, and some of those apprehended have been charged to court.

Elkana gave the assurance that the police and other security agencies would continue to put in their best to ensure the return of lasting peace and security in the state.

He sympathised with the victims for the suffering they went through while in captivity and promised that the command would redouble its commitment to protecting the lives and properties of the people.

The Secretary to the State Government, Kabiru Balarabe, who received the rescued victims thanked the police and other security agencies for enforcing the new security measures.

He assured them of the government’s continuous support and encouragement to carry out their duties effectively, adding that victims would be properly treated before being reunited with their families.

“We are also grateful to all those repentant bandits who have led the way to this success, may Almighty reward you abundantly,” Balarabe said.

“These rescued victims will be treated well as we have already kept in stock all the medications required to take care of them, we will make sure that we make all efforts to reunite these victims with their respective families.”

← AfCFTA has the potential to lift over 100 million Africans out of poverty – CBN   2021 CSW: EKEDC hosts Quiz and Debate Competition for Schools →