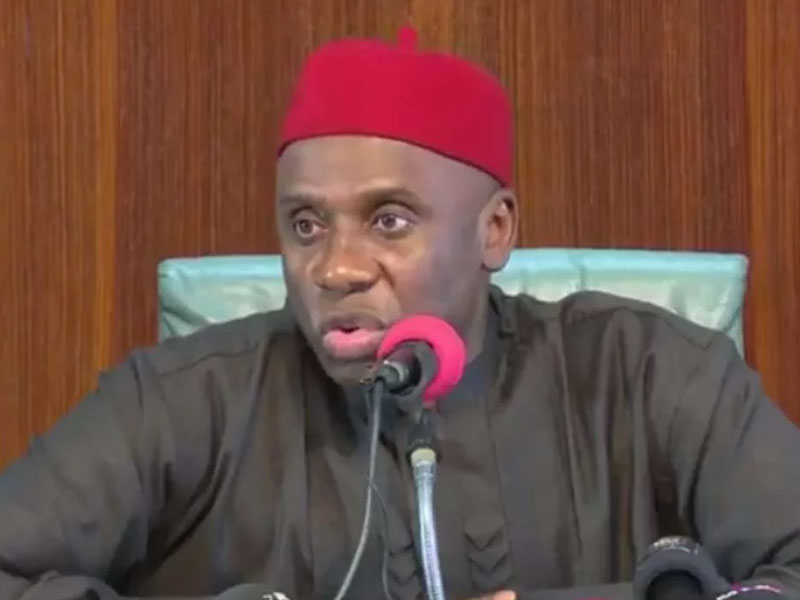 Barring any unforeseen circumstances, the Lekki  Deep Seaport will start operations by the fourth quarter of this year.

The elated Transportation Minister, Rotimi Amaechi stated this as he expressed his excitement at the pace of work at the Lekki Deep Seaport project when he visited the site.

Amaechi, also expressed hope that operational and commercial services at the port would commence by the last quarter of 2022.

The Minister while on an assessment tour of the port site at the weekend described the level of construction work as very impressive and commended the Bello-Koko led Management of NPA for availing the contractors the necessary support.

The Minister charged the contractors to sustain the tempo of work and to re-double their efforts to ensure the scheduled commissioning date and commencement of cargo operations is achieved.

Speaking to the project contractors on his observations, the Honourable Minister said: “the last time we came, there was no quay wall, just the breakwaters. But today, there are many visible improvements. It doesn’t mean that you have delivered; it simply means you will achieve it. The last time we came, your chairman said it wasn’t possible, and I told him wait and see, if it’s not possible, then you know that I am not Minister of Transport. We are supposed to commission by September, which is in the old agreement, but if you double your efforts on this job, we can commission (it) by July”.

The Chief Operating Officer of Lekki Port/Lekki Free Trade Zone (LFTZ), Laurence Smith, thanked the Minister and his team for the visit. He appealed for increased government support on the construction of access roads to the port location as well as linking the port to the national railway grid.

He acknowledged the support and synergy provided by the Bello-Koko led Management of the NPA, especially in the procurement of Vessel Tracking System (VTS) for the Lekki channel and other port locations in the country; procurement of two (2) 80 tons bollard pull ASG Tugboats and two (2) pilot boats for deployment to the Lekki Deep Seaport.

The port will have a truck parking area with a capacity for 300 trucks to avoid indiscriminate parking of trucks on the access road to the port when it becomes operational in the next few months. At the terminal area, the Customs Building will have a full-fledged examination bay for proper inspection before trucks are allowed to evacuate the area. There is also a dedicated area for impounded goods.

Equity owners of the Lekki Deep Seaport are Tolaram Group, China Harbour Engineering Company, Lagos State Government and Nigerian Ports Authority (on behalf of the Federal Government of Nigeria). On completion, it would be a world class multi-purpose facility, serving as a regional distribution and transshipment hub for West and Central Africa.