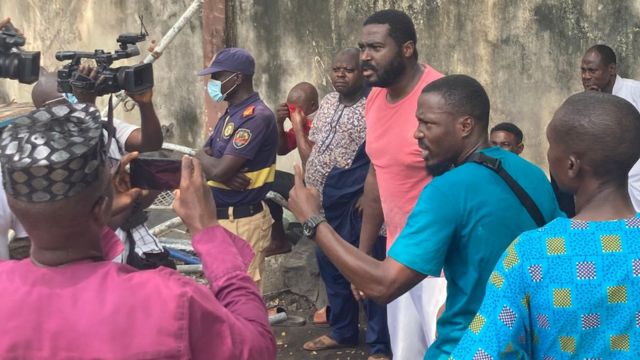 Anger and frustration is replacing the hope of finding survivors at the site of a collapsed residential building in the wealthy neighbourhood of Ikoyi in Nigeria’s biggest city of Lagos, where at least 20 people died.

The febrile intensity of the rescue operation after the building came down on Monday afternoon has been replaced with the crunching rumble of an excavator digging and lifting concrete slaps without too much care.

Voices of frustrated families and friends who have gathered here occasionally fill the air as they shout at officials who visit the site and disapprove of the rescue crew’s methods.

“I have no faith in them,” Bakare Farati says.

He hasn’t left the site since Monday – his uncle has still not been accounted for.

The anguish has taken a visible toll on him. He looks tired, dejected and defeated.

“It’s a retrieval operation. Not a rescue operation. They’re not taking care to search for bodies. One of the bodies they pulled out this morning was dismembered by the excavator,” Mr Farati adds.

His uncle Wale Bob Oseni, in his late 40s, was at the site visiting a friend when the building came down. He was due to fly back to the US, where he lives part-time, that evening, he says.

“The authorities stopped working for seven hours on the first day. They don’t have the urgency you’d think they’d have in this type of situation,” Mr Farati adds.

Other relatives of the missing share his frustration. A man in his 30s who did not want to be named says his friend was also visiting the site.

“The pace of the search is too slow. They’re over it. They just want to get out of here,” he says angrily. “It’s disheartening and shows how little human lives are valued in Nigeria.”

“We’re just keeping hope against all hope,” he adds.

Officials haven’t settled on the number of fatalities but different versions just above 20 have been shared.

The Wednesday crowd is smaller compared to the hundreds who gathered here minutes after the building collapsed. They used their bare hands to lift the rubble to try and rescue those trapped.

Meanwhile, the security cordon has grown bigger, along with the number of soldiers and police officers.

A man is overheard telling the workers to wait for a hearse to drive closer to the site instead of carrying the bodies to where the vehicle is parked.

Two bodies were retrieved from the rubble in the morning, but no-one has been found alive since Tuesday morning.

Near the site, a woman waits anxiously, occasionally taking calls from friends and relatives. Her boss is amongst those missing. He was a contractor working at the building.

His elderly mother still doesn’t know he was at the site the day of the collapse so she doesn’t want to be named or give his identity.

“It could have been me,” she says. “I’ve visited the site many times, been on every floor. I’m still in shock. You never think a building of that size can come down like that. You think they’ve done their due diligence.”

A rare silence engulfs the site as Lagos state Governor Babajide Sanwo Olu visits the site for the second time in less than 24 hours – the deference angers the relatives.

“Why has the work stopped?! You’re wasting valuable time,” shouts Mr Farati, as an official begs him not to make a scene.

“Remember that people’s lives matter!” adds the man in his 30s whose friend is still missing.

“You are stopping work which should be ongoing! Why don’t you do your press conference there and allow the workers to continue?” he says, pointing to an alternative venue.

There’s a simmering anger amongst onlookers as well, many of whom worked on the site and want to help with the rescue effort. Mr Farati says he would have preferred if they’d been allowed to help.

“They have their way of getting people out. They were successful on the first day but then they were stopped from searching by soldiers,” he adds.

A worker for the Department of State Services who did not want to named for fear of losing his job, said he was on site 30 minutes after the 21-storey tower collapsed.

“It was terrible, chaos. Other builders tried to help and recovered four bodies. But the excavator didn’t come for four hours and then broke down 15 minutes after it started working,” the worker says. “Rescue trucks have been running out of fuel. How can this be? You’d think they’d have fuel on standby.”

Governor Sanwo Olu told reporters that the search and rescue operation was ongoing.

He added that workers were pumping oxygen and water into the site in case any survivors remained, and that machines were occasionally being stopped to carry out a sound search, where workers call out for survivors and wait to hear a reply.

The governor says the causes of the collapse are not known but there were many irregularities including not having a record of all the people on the site each day. He’s set up an independent panel to investigate and given them a 30-day deadline to reveal their findings.

A desk has now been set up just after the security cordon to take the details of those still missing relatives and support the relatives. But for some, it’s too little too late.

As if on cue, a mortuary van drives past the site and parks nearby.