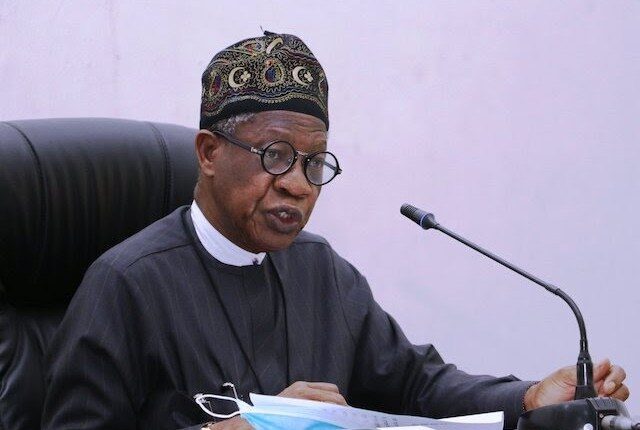 The Federal Government is set to prosecute 400 suspects arrested for allegedly funding terrorism in the country.

This is according to the Minister of Information and Culture, Lai Mohammed, who stated this on Tuesday during a press conference in Lagos.

He also reiterated the commitment of President Muhammadu Buhari’s administration in tackling the menace of insurgency, banditry and other security threats across the country.

“The Honourable Attorney-General of the Federation and Minister of Justice has announced that the Federal Government is set to prosecute 400 suspects arrested for allegedly funding terrorism,” he said.

“This is unprecedented and its a testament to the government’s determination to decisively tackle terrorism and other violent crimes.”

The Minister also appealed to Nigerians to support security agencies, who face the added task of having to watch their backs while working to protect others.

Mohammed also described attacks on security formations as a declaration of war against the country, condemning the assault on security operatives.

He added, “While the government continues with these efforts to restore peace and security continues, I want to appeal to all of us to play our part in lowering the palpable tension in the polity as a result of the security challenges. The first step is to tone down the rhetoric.

“Now, there is a growing dangerous trend which I will like to comment on. It is the practice of launching deadly attacks against the nation’s security personnel. Soldiers as well as police, customs, and other security agents have been killed and maimed in some parts of the country in this growing trend of targeting security forces.

“I want to say, unequivocally, that any attack on our security men and women is an attack on the state and a declaration of war against the nation. It follows, therefore, that this will be countered with overwhelming force.”

Nigeria has been experiencing a series of security threats ranging from terrorism, banditry, militancy, cultism among others in several parts of the country.

The country has been battling terrorism for more than a decade which has killed 36,000 people and displaced hundreds of thousands in the northeast.

The Islamic State of West African Province (ISWAP) split from the jihadist group Boko Haram in 2016 and has since become a dominant threat in Nigeria, attacking troops and bases while killing and kidnapping passengers at bogus checkpoints.

On March 1, jihadist fighters burnt down a United Nations humanitarian compound in the town of Dikwa after dislodging troops, killing six civilians.

Nigeria’s jihadist violence has spread to neighbouring Chad, Cameroon and Niger, prompting a regional military coalition to fight the insurgents.