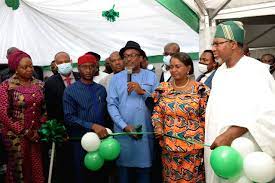 The Nigerian Content Development and Monitoring Board (NCDMB) and the Ministry of Mines and Steel Development on Thursday officially launched made in Nigerian Barites that has met specifications for use in the oil and gas industry, mostly in drilling operations.

He also announced that imported barites would no longer be allowed for use by the Nigerian oil and gas industry from 2022.

He expressed delight at the alignment of objectives by the Ministry of Petroleum Resources and Ministry of Mines and Steel Development in supporting the attainment of the aspirations of the Nigerian Oil and Gas Industry Content Development (NOGICD) Act.

He recalled that the Board had issued a Guideline in May 2021 where it approved four firms for the supply of Barites required for any drilling project or contract in the Nigerian oil and gas industry. The Board alsolisted 10 other companies that would be upgraded to Category A NCEC, as soon as they meet the requirements of the Guideline for the Utilization of Locally Produced Barite and Drilling Fluids in Nigerian Oil and Gas Industry.

The Executive Secretary charged the ministry and barite miners to focus on the improvement of the Health and Safety Practices at the Mines, Optimal Barite Production in volumes and to the required specification and Availability of accurate geological data.

He also emphasised the need to address Host Community issues and Environmental Practices leading to land degradation, Provision of adequate infrastructure and logistics, Improved access to financing for equipment and working capital and Patronage and utilization of Nigerian barites by Oil and gas operators and service companies.

He stated that improvements in these areas will positively impact the sustainable development of the Nigerian Barite value chain.

He assured that the Board will continue to collaborate and protect investors in the entire value chain of the Nigerian Oil and Gas Industry, adding that first and exclusive consideration will always be given to locally produced goods and services in line with the provisions of the theNOGICD Act.

In his remarks, the Minister of Mines and Steel Development stated that the launch would end decades of importation of barites, affirming that the barites being launched met the API standards, which is the global specifications demanded by the oil industry. He stated that Nigeria was blessed with 47 solid minerals deposited across the country and barites was among the seven strategic minerals designated by the ministry for top-priority development.

He said that barites occur within the Benue trough- Benue, Taraba, Nasarawa, Plateau, Gombe and Cross River and Zamfara in North-western part of the country.

Adegbitealso announced that the Ministry of Mines and Steel Development would set up a marketplace portal that would connect all stakeholders along the barites value chain to a hub that allows easy coordination, stocking, effective costing and seamless sale of barites. He added that the ministry would coordinate the process and ensure that appropriate revenues from the process are remitted to Government.

He explained that the launch of made in Nigerian barites wouldincrease revenue to Government through royalty payment andconserve foreign exchange spent previously in importing barites. He added that the development would also createjobs, especially in local communities where barites are mined and processedand earn Nigeria some foreign exchange when the mineral gets exported.