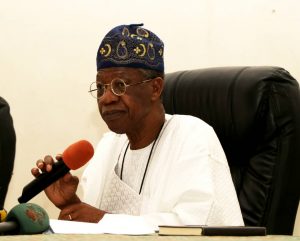 Lai Mohammed, the Minister of Information, Culture and Tourism, has said that the Federal Government’s ban on Twitter’s operations was in the country’s interest

The minister, who stated this when he appeared before the House Committee on Information on Tuesday, in Abuja, cited various sections of the constitution of the Federal Republic of Nigeria in support of the action that was officially taken in the light of the security challenges facing the country.

He  said the Federal Government had begun talks with the micro-blogging site to resolve the matter, adding, however, that until then, the platform remained banned.

The  Federal Government placed a ban on the operations of Twitter, on the grounds that the social media platform was being used as a tool for destabilising the country.

Rep Shaba Ibrahim (PDP-Kogi), a member of the committee, observed that anything would pale into insignificance where national interest and security were at stake.

He said that the minister did a good rendition of the legal framework that supported the steps taken, adding that allowing such infractions by Twitter to go unchecked, until the President’s tweet was taken down, amounted to a disservice to the country.

Another committee member, Fatuhu Mohammed (APC-Katsina),  called for the regulation of social media because the time had come for the country to face up to the real issues confronting it.

He added that if the Minister had not banned Twitter, with the permission of Mr President, the kind of insults to the sovereignty of Nigeria, coming from its users, was worrisome.

Similarly, Rep. Chinedu Ogah (APC-Ebonyi), also a member of the committee, stated that if the law regulating social media had been implemented, the activities of the micro-blogging site would have been checked.

“For example, in China, social media is being regulated and such a thing is not in Nigeria, and we have all those agencies that are capable of the regulation in the country.