Embrace Tourism As Tools For Poverty Reduction – FG to states 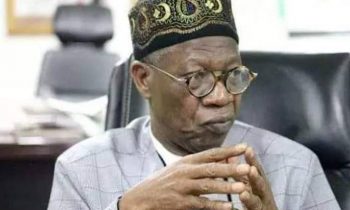 The Federal Government has challenged the states to see tourism beyond leisure and entertainment but as economy and tools for poverty reduction.

The Minister of Information and Culture, Lai Mohammed gave this advice on Monday in Birnin-Kebbi at the 2021 World Tourism Day celebrations.

While addressing a joint news conference with the Kebbi state Deputy Governor, retired Col. Samaila Dabai, the minister said if harnessed, the tourism sector could transform the economy of many states and ensure gender equality.

He said the states should take cue from Kebbi which had a lot to offer the world and a lot of stories to tell in tourism development.

“This is well demonstrated in Kebbi State, given the fact that the tourism sector in the state revolves around components such as culture, agriculture and sports, among others.

“In the areas of culture and sports, the annual Argungu International Fishing festival, the Durbar, traditional wrestling and camel racing, among others, have over the years proven to be viable sources of economic growth.

They have also contributed in the area of job creation and empowerment, especially for the women and youth.

“Kebbi State is known for its industrial growth, especially in the areas of rice mills and tomato factories which employ a lot of women as farm staff (80 per cent), out growers (30 per cent) and factory staff (10 per cent).

“All these underscore the state’s efforts and capacity to achieve the Sustainable Development Goals (SDGs),’’ he said.

The minister commended the Kebbi state Governor, Sen Abubakar Bagudu for his commitment to tourism development.

He also hailed the governor’s decision to restart tourism in the state by accepting to host the 2021 World Tourism Day following the roll-out of the vaccine and the lifting of restrictions on COVID-19 pandemic.

The Deputy Governor said he was delighted that Kebbi was chosen to host the 2021 world tourism day.

He said the state had distinguished itself as a one-stop shop for tourism and culture by hosting many festivals that yearly attracts numerous tourists from within and outside the country,

NAN reports that in marking this year world tourism day, the state hosted a three-day polo tournament in Argungu, cultural night and the minister was turbaned Kakakin Kebbi (Cultural Ambassador of Kebbi).

The date was chosen to coincide with an important milestone in world tourism, which is the anniversary of the adoption of the UNWTO Statutes on 27 September 1970.

The essence of the annual celebration is to foster global awareness of the social, cultural, political and economic value of tourism.