CBN Will Not Allow First Bank To Fail – GOV 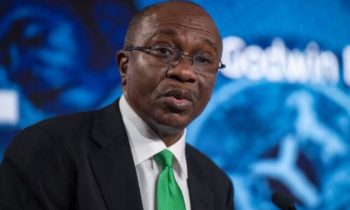 The governor of the Central Bank of Nigeria (CBN), Godwin Emefiele, says the apex bank will ensure that the right things are done regarding the shareholding tussle at First Bank of Nigeria.

He stated this while speaking with journalists on Tuesday after the monetary policy committee’s two-day meeting where it was agreed that the CBN key lending rate should be maintained at 11.5 percent.

The apex bank governor said the Securities and Exchange Commission (SEC), the capital market regulator is responsible for issues relating to shareholding.

According to the CBN governor, First Bank is very relevant to the Nigerian banking sector because it is the oldest bank in the country — it was established in 1894.

“As it affects the running and operations of the bank, we (CBN) will take preeminence in ensuring that the right things are done,” Emefiele said.

He said he was excited that citizens are in a scramble to acquire First Bank’s shares.

“If anything happens to First Bank, it means something has happened to the Nigerian banking system. That is why we are taking our guidance about how to get the bank a foot seriously.

“Six years ago, like I said, because of an aggressive buildup of non- performing loans, the share price of First Bank was about N2. We took it up. Then, everybody was running away from the shares of First Bank.

“Naturally, returns are sent to CBN about individual shareholders. And of course, if our position is not in tandem with that of SEC, we will talk to SEC about it.

“So far, I think we should take the position of SEC as the regulator of the capital market because regulating share price and ownership is the sole responsibility of SEC.

“We would not want to override SEC on these issues but we will continue to work with them. We have a very good relationship with them.”

Since the ownership tussle between Femi Otedola and Tunde Hassan-Odukale broke out in October, SEC is yet to take a position on the matter as the market regulator.

Otedola had acquired 5.07% stake in the bank, leading to media reports that he had become the single largest shareholder and was in a pole position to take over as chairman of FBN Holdings Plc, the holding company of First Bank of Nigeria.

However, a document surfaced on social media which credited Tunde Hassan-Odukale, another shareholder, with 5.36%. His shares were partitioned into two: 4.16% and 1.20%.

Before then, Hassan-Odukale’s stake was estimated at 3%.

In October, the Nigerian Exchange Limited (NGX) queried FBN Holdings Plc for classifying the shareholdings of Hassan-Odukale and related parties into two.

The pension regulator said the equity investments in FBN Holdings made by Leadway Pensure Ltd on behalf of the pension funds under its management “are in the name of the pension fund and belong to the RSA” and “cannot be appropriated or classified as shareholdings of any related party to the PFA”.

PenCom’s position appears to put to rest claims that Tunde Hassan-Odukale and related entities own 5.36% stake in FBNH — which would have made him the single largest shareholder

Meanwhile, the Central Bank of Nigeria (CBN’s) Monetary Policy Committee has maintained its key lending rate at 11.5 per cent.

At the end of its two-day meeting on Tuesday in Abuja, the CBN Governor, Godwin Emefiele, mentioned that the committee members unanimously voted to retain the monetary policy rate at 11.5%, whilst keeping all other monetary parameters constant.

This will be the 6th consecutive time this year that the rates remained unchanged.

The MPC also pointed out that its policy within the last few months is showing results, as reflected in the 4.03% growth in real GDP and the 7th consecutive monthly decline in Nigeria’s headline inflation.