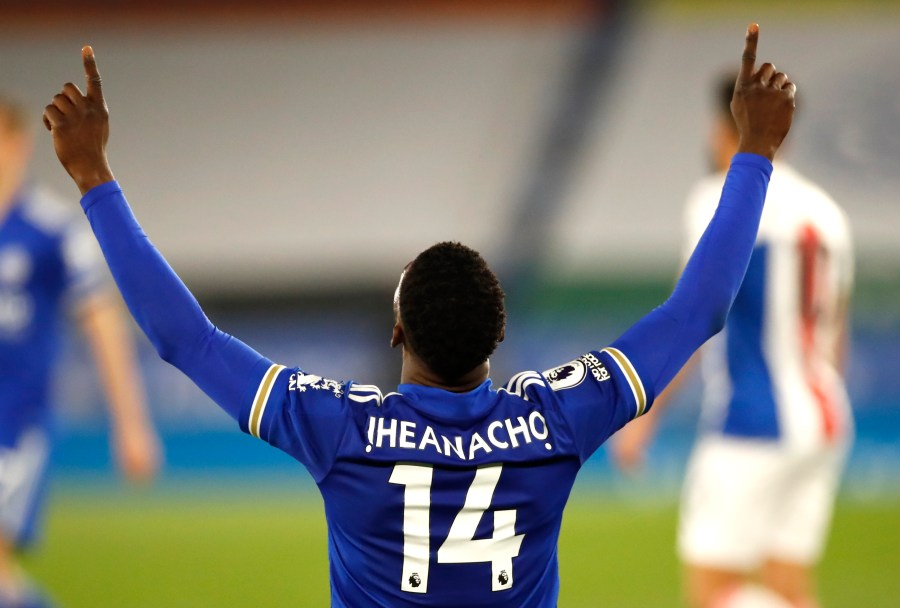 Fresh from being voted the best player at the Under-17 World Cup in 2013, the Nigeria striker signed his first professional contract at Manchester City the following year but had Sergio Aguero, among others, ahead of him.

Iheanacho had his moments — mostly as a substitute or in the early rounds of cup competitions — but was never likely to be first choice at City at such a young age and moved to Leicester in 2017 after one year under Pep Guardiola.

There, another club great stood in his way: Jamie Vardy. And with Leicester playing one up front, Iheanacho again found himself mostly stuck on the bench and had scored only nine Premier League goals in 3½ seasons by the time an injury crisis hit the team in February.

Leicester manager Brendan Rodgers had been struck by the way Iheanacho always had a positive mentality in training, even in his many low and frustrated moments. He also noticed how diligent the player was in working on his finishing, unlike many strikers Rodgers had worked with who relied on their natural talent.

So, Rodgers altered his system and chose to pair Iheanacho with Vardy.

Six years into his senior career, the 24-year-old Iheanacho was finally getting a run of games on the highest stage.

He hasn’t looked back.

With 13 goals in 12 straight appearances, he is the form striker in English soccer since the start of March and is the player most likely to lead Leicester to victory in the FA Cup final against Chelsea on Saturday.

“My only worry with him,” Rodgers said, “is that he’s running out of celebrations. He needs to keep looking at the numbers of celebrations he has left. Hopefully he can keep scoring and keep celebrating.”

Nowhere have Iheanacho’s goals been more important than in the FA Cup.

He scored winners against Brighton in the last 16 and against Southampton in the semifinals at Wembley Stadium. In between, his double helped Leicester beat Manchester United 3-1 in the quarterfinals, in an individual display that made many really sit up and realize Iheanacho’s emergence was no flash in the pan.

“I think FA Cup loves me,” said Iheanacho, who scored a hat trick for City in a cup match at Aston Villa in 2016 in just his fifth start for the team. “And I love the FA Cup.”

Breaching Chelsea’s defense will be another challenge entirely, with the team having kept 19 clean sheets in 26 games since Thomas Tuchel arrived in late January. It is the elite defense in Europe at the moment, not just England.

Yet Iheanacho’s finishing has been of such a high standard that he is almost impossible to keep quiet. Where he stands almost alone, at least in the Premier League, is his ability to get shots off quickly by nudging the ball slightly to one side and striking it immediately with little back-lift but still plenty of power, before his marker is set.

There have been two examples of that in recent weeks — his sublime winner against Crystal Palace on April 26 and then what proved to be just a consolation strike against Newcastle last week.

Leicester’s own goalkeeper knows all about that.

“He’s so good at the particular one where he shifts it and then puts it through the defender’s legs and wrongfoots the goalkeeper,” Kasper Schmeichel said. “He does it in training all the time. He’s a nightmare in training, to be fair.”

Iheanacho’s talent has always been there. In that Under-17 World Cup eight years ago, he scored six goals and led Nigeria to the title.

At one stage while at City he had the best goals-to-minutes ratio of any player in Premier League history who had scored a minimum of 10. That came after he scored 12 goals from only 19 shots, netting every 96 minutes.

No wonder Guardiola called him “a natural goalscorer.”

Still, his current form has come out of nowhere. He didn’t score a single league goal from September 2018 to December 2019. This season, he hadn’t scored in the league until Feb. 3 — now he’s Leicester’s top scorer and has turned Vardy into a creator more than a poacher.

“He has very quickly won over people,” Rodgers said. “That is just through hard work, resilience and talent. What you are seeing is a young player at the top of his game.”