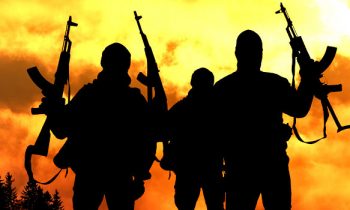 Gunmen in Nigeria’s capital abducted six people from the staff quarters of a university, officials said Tuesday. It was the first attack of its kind in Lagos since a wave of school kidnappings began in the country more than a year ago.

The University of Abuja said in a statement on its Facebook page that four staff members and their children were taken by unknown assailants. University employee Murtala Muhammed, who was on campus premises when the abductions happened, told The Associated Press that the gunmen launched their attack around midnight.

“They arrived at the quarters and started shooting and shooting,” he said.

There was no immediate claim of responsibility for the kidnappings, but suspicion immediately fell on a suspect who has been blamed for scores of similar abductions for ransom.

Some 1,400 students have been kidnapped during attacks on schools in Nigeria over the past year. Many were later released after reports of large ransoms paid. Until Tuesday, however, all of the attacks took place in more remote locations.

Security experts have told The Associated Press that most of the kidnappers are former Fulani herdsmen who became caught up in Nigeria’s prolonged conflict between farmers and nomadic cattle herders.