We Will Continue To Prioritise Railway System – Buhari 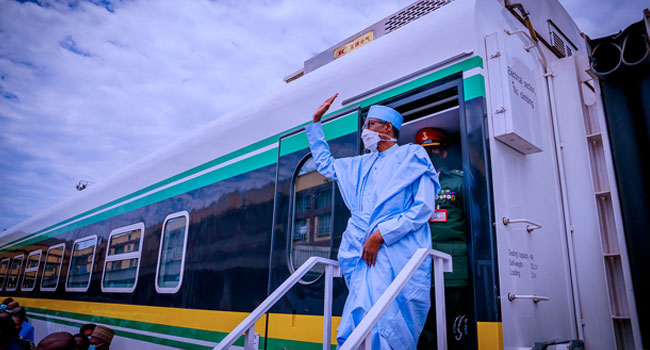 President Muhammadu Buhari on Thursday stressed that his administration will continue to prioritise the railway system. As inaugurated the commercial operations of the Lagos-Ibadan railway project at the Mobolaji Johnson Railway Station, Ebute Metta, Lagos.

He said the project is another milestone in the drive of his administration to revitalise the railway system and establish it as a choice mode of transportation for both passengers and freight.

According to a statement signed on Thursday by Special Adviser to the President on Media and Publicity, Femi Adesina,  the President pledged that his administration would continue to prioritise the railway system as a transportation backbone that can transform industrial and economic activity in the country,” the statement read in part.

Speaking about how it will benefits of the Lagos-Ibadan corridor as well as other on-going railway projects across the country, President Buhari said, ‘‘This vital line establishes an end-to-end logistic supply chain in railway transport within its short corridor, Lagos – Ibadan, as goods to the hinterland would now be transported by rail directly from the Apapa port Quayside straight to the Inland Container Depot located in Ibadan from where it can be distributed to other parts of the country.”

He said further that “in clear recognition of the challenges posed to our economic growth by absence of strong and effective infrastructure, we have in the rail sector, further to other ongoing railway infrastructure projects, embarked on the completion of the outstanding segment of the Lagos – Kano railway, which is Ibadan – Kano.”

The President said the Lagos – Kano railway project when completed will link the Kano – Maradi line at Kano and a rail link from the Nigeria southern ports of Lagos to Maradi in Niger Republic will be achieved.

‘‘The connection through rail would position Nigerian ports as the choice for import and export business of the people of landlocked Niger Republic.

‘‘This would be beneficial to the economy through employment from new business opportunities and wealth creation.’’

The President expressed delight that his directive to the Federal Ministry of Transportation and Ministry of Finance on reaching financial agreements with appropriate co-financiers to partner with the Federal Government for the development of the Ibadan – Kano railway was yielding results.

He noted that the Ibadan-Kano project would have a connection to the Tin Can Island port as well as the West-East Coastal rail line from Lagos to Calabar linking Onitsha, Benin, Warri, Yenagoa, Port Harcourt, Aba, and Uyo.

Shortly after he completed his assignment with the  Railway, the president moved ahead  to Inaugurates New Security Assets To Combat Piracy along the same corridor.

He said the Federal Government has secured 10 convictions for various maritime offences since the Suppression of Piracy and other Maritime Offences Act was signed into law in June 2019.

The President disclosed this at the official flag-off of the Integrated National Security and Waterways Protection Infrastructure in Nigeria also known as the Deep Blue Project at the ENL Terminal, Apapa Port, Lagos.

He said he was  confident that the project, which provides a robust maritime security architecture, will enhance maritime domain awareness capability and improve law enforcement action, particularly in the prosecution of suspects under the Suppression of Piracy and other Maritime Offences Act which I signed into law in June 2019.

‘‘This Flag-off is an important step in the continuing shift in strategic action about regional maritime security.

‘‘It will serve as a benchmark for member states in the Gulf of Guinea and other relevant stakeholders to further develop innovative strategies and align efforts with the subsisting framework to improve maritime security in the region,’’ he said.

Calling for greater collaborations among countries in the Gulf of Guinea to secure Nigeria’s waters and beyond, President Buhari noted that the assemblage of the new maritime security assets was coming at a critical time when global discussions are centered on piracy activities and the new dimension it has taken in the region.

‘‘With the world’s waters accounting for over 80% of transportation requirements of the global economy, concerted efforts and innovative actions are required to address attendant security challenges.

‘‘Therefore, the flag-off of the project marks an important milestone in this regard and in our collective effort to tackle security challenges in the form of piracy and other maritime crimes in Nigeria and the Gulf of Guinea. It is also a demonstration of government’s strong commitment to ensuring security.

‘‘This intervention, no doubt, will facilitate a conducive environment for the maritime sector to thrive and contribute to the diversification of the Nigerian economy,’’ he said.

The President commended the Ministers of Transportation, Defence, the Chief of Naval Staff, the Director-General NIMASA, members of the Steering Committee, the Project Management Team and all other government stakeholders who have worked together to bring this initiative of the administration to fruition.

Assuring of the government’s commitment to ensure the project’s sustainability, the President urged all critical stakeholders to work collectively for the greater benefit of all Nigerians, member states of the Gulf of Guinea and the global maritime community.

← Buhari Takes A Shot At The Youths Again, Tells Them To ‘Behave’ If They Want Jobs Two Cocaine Traffickers,  Uber Driver  Arrested At Lagos Airport →