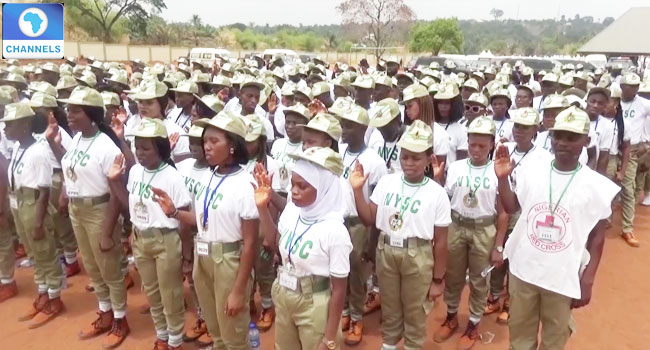 Twenty- five prospective Corps Members, including a nursing mother have tested positive for the coronavirus disease at the Gombe State NYSC camp located in Amada – Akko Local government Area of the state.

The Commissioner for Health, Habu Dahiru confirmed this to Channels Television on Sunday via a telephone interview.

He disclosed that the 25 prospective corps members were tested between the last 3 days and have been moved to the state-owned Infectious Disease Centre in Kwadon.

“Out of 1,291 that were tested  25 persons turned positive by Polymerase Chain Reaction, one is a nursing mother” the Commissioner stated.

“For the sake of coordination the incident management system in Gombe, chaired by  myself has conducted a meeting at the Public Health Emergency Operation Centre and we have also moved as required by the guideline to Kwadon Isolation centre.”

On the welfare arrangement of the corps members, Dahiru noted that the state government has made provisions for it at the isolation centre, as well as their medication and security.

He also assured that the patients will be managed at the isolation centre until they test negative and are made to join other corps members, adding that the state government has also put machinery on ground to avoid fear and trauma among them.

The Commissioner added, “We have also provided psychosocial support because some of them may be asymptomatic and may wonder why they are kept there. So we had to educate them that they are at risk to the general public because unconsciously they will be infecting others.

“We have introduced sporting activities such as football, volley ball and also activated satellite dishes with televisions to keep them entertained.”

With the new Delta Variant in Nigeria, Dahiru asked members of the public to observe the protocols, noting that the virus is still raging.

He also called on residents of the state not to relent on the use of the non-pharmaceutical interventions to avert further spread of COVID-19 in the state.

“We have to continue testing, so that the more they come, they get verified and everybody that comes into the camp must be tested.

“We are only telling the community in Gombe that there’s Covid-19 still in transmission and they need to observe the non-pharmaceutical measures and when vaccines are available, we urge them to avail themselves for inoculations,” the commissioner stated further.