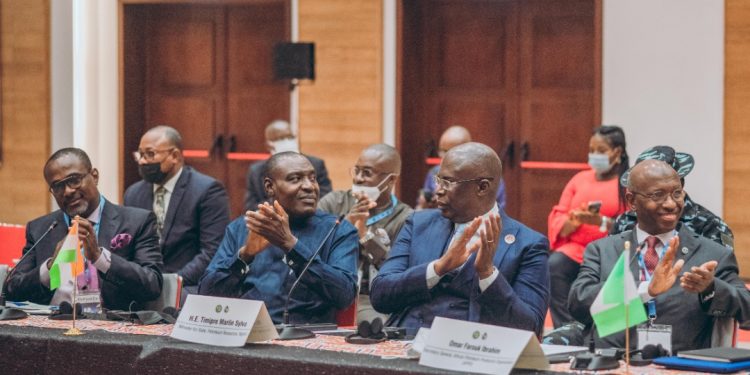 The maiden edition of the African Local Content Roundtable ended on Friday at the Nigerian Content Tower in Yenagoa, Bayelsa State, with a strong push by Nigeria and other members of the African Petroleum Producers Association (APPO) to develop regional oil and gas investments and renegotiate the COP-21 Climate Change Agreement which is driving the accelerated move by developed countries to disuse fossil fuels (oil and gas) as the preferred source of energy for transportation and embrace renewable sources.

The Minister of State for Petroleum Resources,  Timipre Sylva delivered the keynote address at the two-day retreat attended by representatives of APPO member states physically and via the virtual platforms and charged African oil-producing countries and their oil and gas companies to cooperate closely in developing and sharing capacities and capabilities that would optimize hydrocarbon deposits and achieve economic growth and development.

He also advised that it was time to“quickly createinnovative funding mechanisms for major projects using local resources and break away from the yoke of depending on foreign lenders who are becoming increasingly reluctant to fund hydrocarbon-related projects.”

In his presentation, the Executive Secretary, Nigerian Content Development and Monitoring Board (NCDMB), Simbi Kesiye Wabotehinted that the African Local Content Roundtable isa key initiative of theBoard’s Nigerian Content10-Year Strategic Roadmap and the intent is to extend Local Content acrossthe African continent and ensure access to market for capacities that have been developed locally.

He recommended that one of the strategies for growing Local Content in the continent is by creating an Africa Local Content Fund that could be utilised to set up a bank or finance institution to provide funding for the development of oil and gas projects in Africa.

He said the funding arrangement had become necessary in view of the declaration of some countries and banks to stop funding hydrocarbon related projects in their push for a shift towards renewables.“These funds can also be utilized to part-finance infrastructural projects in support of production and evacuation of oil and gas products for use by the African populace,” he added.

Wabote also emphasised the need for African oil producers to invest in research and development, insisting that “no nation can really develop by being a consumer of other countries technology and intellectual properties.

“Local content thrives where there is robust research anddevelopment guideline to drive development of home-grown technology.  Countries that have witnessed appreciable local content level such as Brazil attributed the growth to the priority attention given to R&D.”

In his address, Secretary General, APPO,Dr. Omar Farouk Ibrahim announced the plan by the association in partnership with the Organisation of Petroleum Exporting Countries (OPEC) and other like-minded bodies to demand for the renegotiation of the climate change agreement during the upcoming United Nations Climate Change Conference (COP26) scheduled for November 2021 in Glasgow, Scotland.

He said: “Our position is that we have looked at the 2015 COP 21 Climate Change Agreementand we believe that there is a need for some review of some things that our leaders signed on our behalf.

“Oil is the main stay of our national economies and we want the life of oil to last as long as possible to enable us use the revenue to effectively diversify our economies.”

He explained that COP 21 agreement sought to reduce the world’s use of fossil fuel by 20 percent and increase renewable energy by 20 percent by year 2020 and this would be inimical to the survival of the economies of African oil producers.

The Secretary General hinted that with “proven oil reserves of over a 100billion barrels of crude oil still in our grounds and economies that still heavily dependent on export oil revenue, African nations are not ready to forgo the production of those barrels and classify them as wasted assets.”

He noted that already the leading economies have started to implementthe agreement “by introducing discriminatory policies against fossil fuels, whileinternational financial institutions like the World Bank, International MonetaryFund and others have stopped or plan to stop funding fossil fuel projects.Even the International Operating Companies that built their fortunes from fossil fuels are now redirecting investments away from oil and gas and international centers of excellence in universities are now closing their faculties in other to be seen to be in conformity with the new global paradigm shift.”

Ibrahimwarned that the implication of the push is that “advancement in new technologies in the industry would grind to a haltin the next few years,financing of the industry would dry, influx of capable hands and renewals of skills would also stop.”

He also commended NCDMB for convening the African Local Content Summit and assured that APPO would participate actively in sponsoring and hosting the event across Africa. He averred that different countries started operations in the oil industry at different times and with varied capacities and it was high time the playersbegun to learn from those countries that had accumulated years experience. According to him, “the era of going it alone in this continent and this industry is gone. We need to pull resources together before it is too late.  Together we have what it takes to extend the life of oil, if not for the global market, at least to energize our continent which has over 600m people living without access to modern energy.”

The two-day summit ended with a site visit to the Nigerian Oil and Gas Park being developed at Emeyal-1, Ogbia Local Government Area of Bayelsa State.

← World Environment Day: NNPC Restates Commitment to Sustainable Environment Will Development Of Bonga South West Scale through This Time Around? →