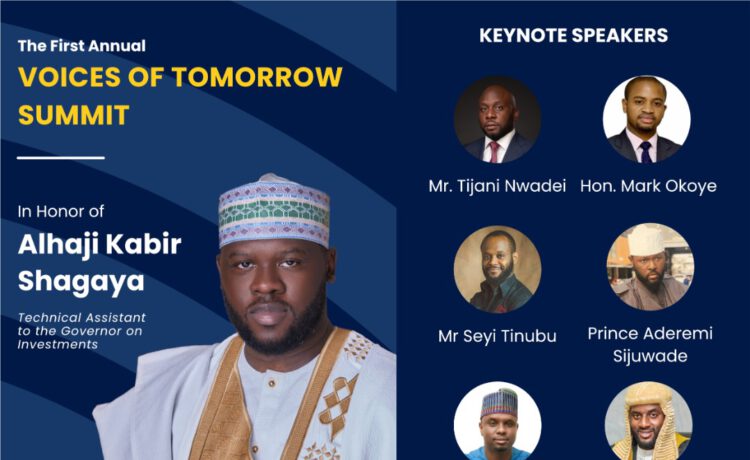 Kwara State  has orientated youths in the state on how to utilize their knowledge and experience efficiently to move the state forward.

Kabeer Shagayah, Technical adviser to state governor on investment while

briefing journalists ahead of an intervention program held at the weekend, tagged “Voice of Tommorow Summit”, explained that the initiative is geared towards guiding the leaders of tommorow on how to live a productive life and to start making necessary changes to push them to the next level.

According to him, Voice of Tomorrow, planned to let the youths understand the responsibility that come with leadership position, responsibilities of influence, having voice and using it appropriately to move the state and the country at large forward.

The theme of the summit is “Responsibility and Expectations” that comes out of influences. He explained that the pillars of influence could be knowledge, relationship, reputation and finance. These according to him are vital as one depends on another in every human’s life to be successful.

Speaking on what informed his decision to take it upon himself to mentor youths, Shagaya noted that “There is need for people in private sector not to keep their wealth to themselves but to actually bring their wealth in to the public sector to help improve Nigeria. Not just inform of donation but also in form of sponsorship and investing back in the state where they generated money from.

“We should stop sending our money outside the country and let us have a responsible proportion in what we spend versus what we make in the country.”

The Technical Adviser, who is also a youth and has been in private and public sectors pointed out that youth play pivotal role in nation building, thus, the need for them to be well groomed and guided to perform optimally in all ramifications and as well, make significant impact in leadership when they grow up.

Shagaya explained that “As youth, I am concerned about giving back to my society. No age limit in mentorship, youth can educate youth better when they are successful than even elderly ones.

“My focus on the summit is to ensure more students look forward to the end result to their education because you find a lot of people into entrepreneurship that don’t see education as an opportunity for them.

“That’s why I initiated this to re-enforce what Kwara is known for; which is education and for that to take place, I am bringing private organizations and all sorts of companies with the essence of job opportunity for students to have off take for their skills as soon as they graduate with good grades.”

40 students each were picked from six higher institutions in Kwara (KWASU, UNILORIN, Alhikmah University and Kwarapoly, Offa Poly, College of Education) for the mentorship, training and empowerment.