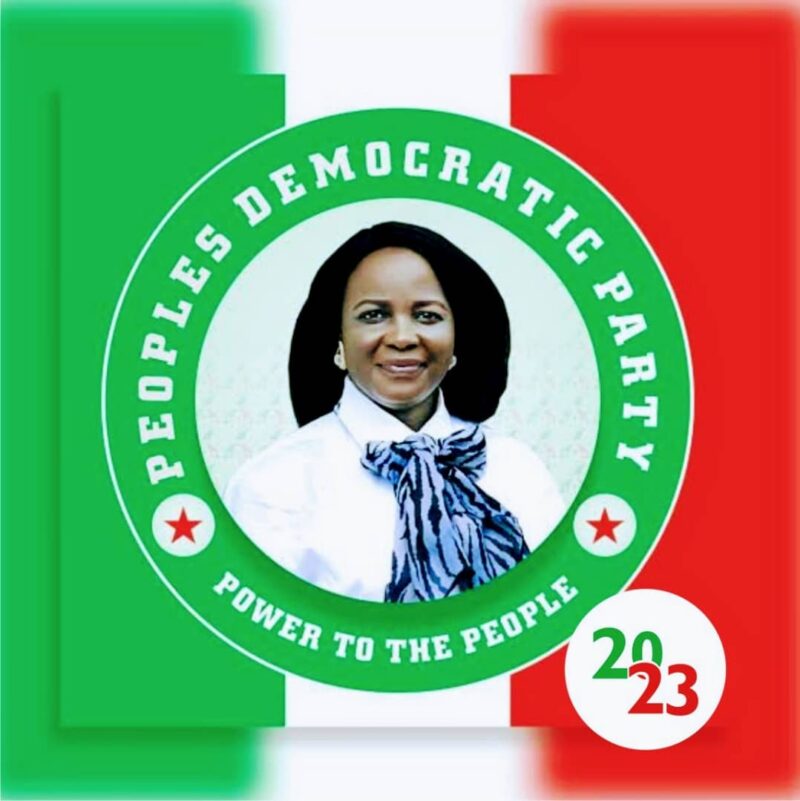 Ambassador Funmilayo Adesanya-Davies is a frontline female Presidential aspirant on the platform of People’s Democratic Party (PDP) at the forthcoming 2023 Presidential Election in Nigeria. She decides to venture into the race to showcase her ability, talent, and as well let Nigerians realize that if given the opportunity to serve; a woman will do better what a man can do. In this interview with some selected journalists including Sikirat Shehu,

Adesanya-Davies explains the rationale behind her adventure to contest for the Nigeria number one position once again, and why she in gunning for the Presidency. Excerpt:

For the benefits of our esteem readers globally, kindly introduce yourself.

Thank you very much, I am Bishop Amb. Funmilayo Adesanya-Davies, a linguist, educationist, public servant since 1988 in Port Harcourt, Rivers State. I have served as a University lecturer and administrator for thirty-six years, 1985 to-date as a consultant, researcher and activist to-date.

Mercy Olufunmilayo, a multi-talented teacher of teachers is a member of POLAC Int’l Peace Advocate.  I serve currently as the Country President, International Director, as well as the Deputy Chairperson on the Board, serving humanity towards achieving ECOWAS Millennium Goals.

POLAC – Positive Livelihood Award Centre, alias UN-POLAC ‘s mandate is to enhance the effectiveness of the UN Millennium Development Goals and UNESCO Culture of Peace Programme particularly the maintenance of peace and unity in diversity.

What are your chances of picking the party ticket knowing well that women have not been given enough opportunity to govern even at the local, and

The terrain is quite changing, I believe the chances are brighter unlike in the days of Dr. Sarah Jibril and Prof. Remi Sonaiya. Gender inclusion has now become imperative globally and as such in Nigeria, successful election and governance would be based on this, as the next phase of political leadership takes shape. This we can glaringly observe in the case of Kamala Harris in the last US election, If it can happen in Liberia it can happen, even better in Nigeria.

What are your set objectives as female presidential aspirant?

As an academician, Nigeria will witness functional, effective, efficient, accessible and affordable education, as well as better governance, delivery of dividends of democracy, massive employment, accelerated economic development, improved health delivery, massive human capital development, massive infrastructural development, aggressive fight against corruption, improved welfare for Nigerian workers, and the masses, when I, PMA – Choice, becomes the president of Nigeria. As a detribalised Nigerian, services of technocrats shall be fully utilised to its maximum.

Politics in some circle is regarded as dirty game, how are you going to maneuver the storm of playing politics in the midst of die-hard politicians?

I am not new to the terrain, my political journey started with the Accord Party in Kwara state in the 80s before I joined the People’s Democratic Party in the 90s. This informed my declaration to contest the 2019 Presidential election under the People’s Democratic Party, but I later moved to Mass Action Joint Alliance (MAJA) where I emerged as the party’s flag bearer for the 2019 election. It’s been so far so good, I am currently back to PDP, my former party, where I intend to still contest for the presidential election of 2023. I have my own godly style, and cannot be discouraged or intimidated by the said die-hard politicians.

Do you think that women are ripe enough to assume the topmost positions in Nigeria politics?

Certainly yes, amongst others, take for instance, the likes of late Dora Nkem Akunyili OFR (14 July, 1954 – 2014) who was the Director-General of National Agency for Food and Drug Administration and Control (NAFDAC) of Nigeria; the former Co-odinator of Nigeria economy and now the current Director-General of the World Trade Organisation, Ngozi Okonjo-Iweala, and even I myself, a lecturer of 35 years in the University. We have been and are more than capable and ready.

There are lots of challenges confronting this nation, both internally and externally, how are you going to tackle these issues?

That’s a major question, thank you. Yes, lots of challenges confronting the nation especially as regards insecurity via criminal activities of the bandits, terrorists, kidnappers and other unscrupulous elements in the county. They invaded communities, markets, churches and schools and killed,maimed, destroy and kidnapped without much resistance by the current government.

No much help from the developed world and the United Nations either, as they seem to be more occupied and busy with COVID-19 than pay attention to the daily destruction of lives and property on-going in Nigeria.

However, with God all things are possible, I already have a road-map for Nigeria, with an agenda in my manifesto which cannot be summarised in few lines here. What I call “The PMA Advanced Restructuring Agenda,” thus, people can always google it, as I have it published online already.

What is the level of awareness for a woman to become President in Nigeria?

There are several Women for Women Groups already set up in the past, and He for She Groups, as well as Youth for Women Groups. We are already mobilising them while creating other new ones such as National Coalition for Female Presidency in Nigeria (NCFPN). Once we are able to improve on this awareness, we shall definitely be successful because women votes accounted for about 47% during the last election.

Nigeria is a multi-ethnicity and multi-religious nation, don’t you view that your religious faith can stand against your aspiration as president?

All Nigerian former presidents have always been of a given faith irrespective of their religious, tribal and political persuasions; and this cannot be of any difference. Nigeria is a multi-ethnic and multi-religious nation, and that is why we are so blessed and would remain blessed by the almighty God. Therefore, my religious faith is an added advantage to my aspiration as president of Nigeria.

How would you source fund for this campaign, because politics in Nigeria we know is all about money?

I believe in being thrifty and it is not a do or die affair, one can only source funds and spend only what one can afford, cutting your cloth according to one’s cloth and size. I have always depended on good-will and well wishers rather than cash. I look forward to a time when money-bag politics and vote-buying will end in Nigeria.

May I add that in addition that, Nigeria has opened the ground for Nigerian women, my ticket is that of Nigeria, as the nomination form is free for women. Our first thanks will thus go to the nation – Nigeria and all political parties which agreed that the ladies could pick our forms politically at all levels for free while we pay only the token for expression of interest. And as such, my presidential form is free. Nigeria is confident that the current challenges in the country can only be tackled by the women, and that is one of the foremost reasons for their decision.

How will you manage your home front with the leadership position if you become the President?

That would be no problem at all, my man is busy and not dependent, my three (3) children are all grown-ups and graduates out of home. I’ll turn sixty (60 years) on October 15th this year, so there is little or no family runs in that sense of home front management, thank you for caring.

May I conclude that, I have a dream, that one day, a woman will emerge as the president of the Federal Republic of Nigeria, and the dream is now !!!” This is because, “if Nigerians elect a female president, it will be a turning point in the nation’s history. It will also be an honour to have Nigeria’s first female president. If Nigeria can give women a chance to rule, I am sure we will never regret it.”