Fight Breaks Out At House of Reps, Senate Rowdy, As Lawmakers Debate Electronic Transmission Of Results 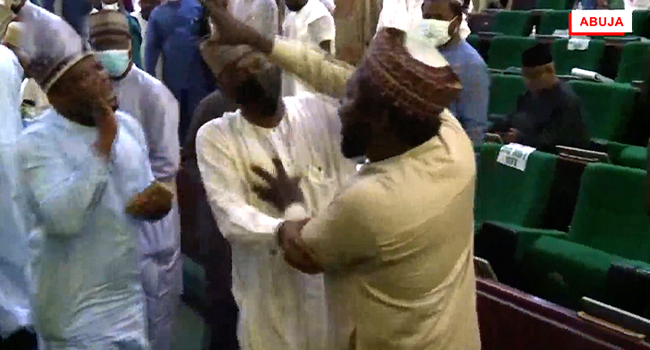 Yesterday, the House of Representative witnessed a very rowdy session as fight broke out among lawmakers while they were debating over the Electoral Act Amendment Bill, with a major focus on section 52(3) which deals with electronic transmission of poll results.

The situation was just a little different at the Senate over the same issue as senators were also at each other’s throat before the senate leadership decided to put the issue into votes.

The new amendment provides that INEC may consider electronic transmission so far as the national network coverage is adjudged to be adequate and secure by Nigeria Communication Commission (NCC) and approved by the National Assembly.

At the beginning when the law makers were doing the clause by clause consideration of the bill, all seemed well as plenary got underway with deliberations on the matter, but the situation changed after legislators voted orally,and Idris Wase, Deputy Speaker clanged the gavel ruling against electronic transmission of results despite a resounding chorus in support of E-Transmission.

The House became rowdy as many congressmen frowned at the Deputy Speaker’s action, with some asking that a clear line of demarcation be drawn.

When the House eventually came to order, deliberations continued on the subject and the lawmakers resolved to vote again regarding the matter.

Another round of votes held and again the Deputy Speaker, despite a resounding vote in favour of an amendment for manual and electronic transmission of results, ruled against the ayes, sending the House into yet another frenzy.

This time it proved almost impossible for the House to be called to order, but decorum returned after a long while.

All was far from over after the House was brought to decorum a second time, even as a motion to suspend consideration and revert to plenary was moved, seconded, but kicked against by members of the Green Chamber.

The Deputy Speaker on Thursday clanged his gavel twice in favour of the nays, despite a resounding vote by the ayes in the House who were in support of transmuting electoral results electronically.

The house eventually reverted to plenary but in reporting progress, the deputy speaker stated that the controversial clause 52 has been considered and approved, but some lawmakers insisted that this is not the case;  it was at this time that yet another heated round of arguments rocked the floor of the hallowed chamber with two lawmakers Ifeanyi Momah and Shehu Koko getting involved in a heated exchange.

Other lawmakers joined the fray while some other honourable colleagues went a great length to restrain those gunning for each other’s necks. This forced the Speaker of the House, Femi Gbajabiamila to take back his seat as chair of the House and moved that the session be adjourned.

With the Speaker’s notion seconded, the session was adjourned till Friday 10am to commence from clause 52, with the INEC Chairman and his NCC counterpart in attendance.

In the same vein, Senators on Thursday voted publicly along party lines over section 52(3) of the electoral act amendment bill, which deals with electronic transmission of poll results.

This means the majority of Senators voted that INEC may consider electronic transmission provided the national network coverage is adjudged to be adequate and secure by NCC and approved by the National Assembly.

Earlier, the Senate was plunged into a rowdy session as the lawmakers contested the amendment of section 52(3) of the electoral act amendment bill.

The new amendment, which was sought by Senator Sabi Abdullahi from Niger state and seconded by Senator Ali Ndume, provided that INEC may consider electronic transmission so far the national network coverage is adjudged to be adequate and secure by Nigeria Communication Commission and approved by the National Assembly.

The controversial amendment sharply divided lawmakers, plunging the session into a rowdy one.

The Senate President was unable to bring the chamber back to order, forcing the Senate to go into a closed-door session.