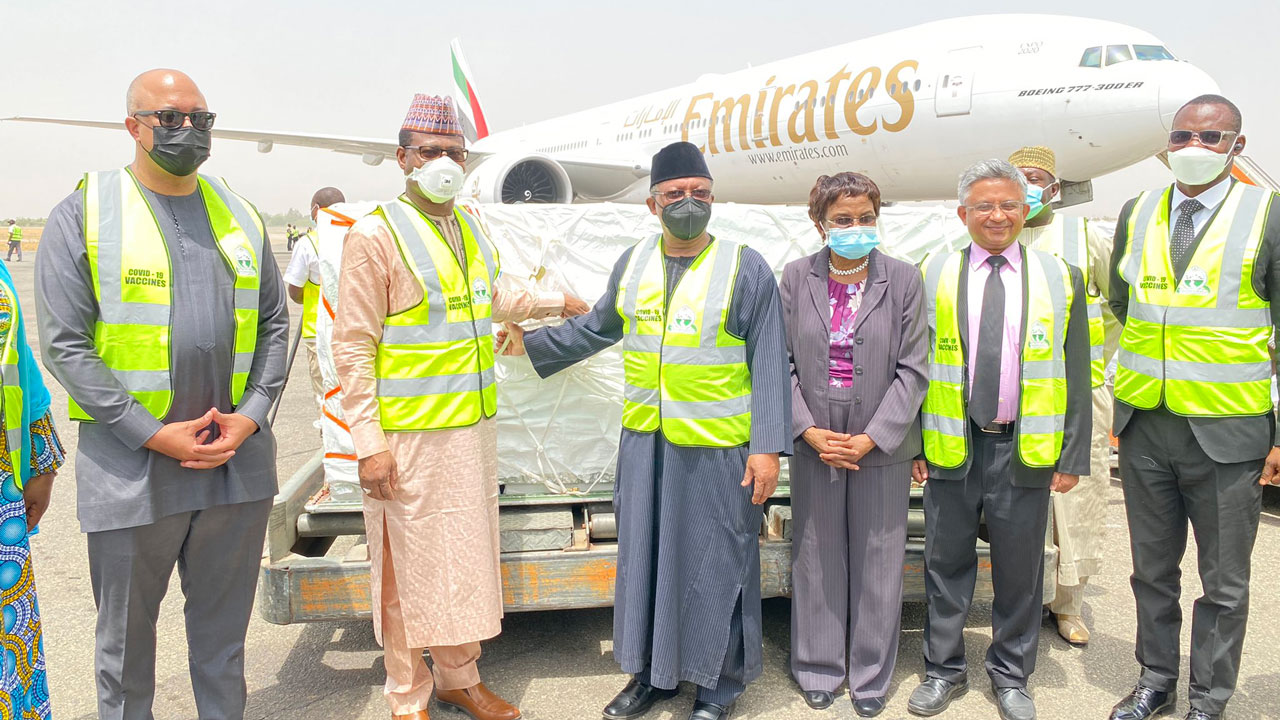 … as 23 cases of Delta Variant  are  reported  in five states

The Federal Government on Monday took delivery of another tranche of COVID-19 vaccine doses.

This is just as  the Nigeria Centre for Disease Control (NCDC ) has announced that  thirty –two  Delta variant cases of coronavirus (COVID-19) have been reported in five states across the country.

The  over four million doses of the Moderna vaccine, was donated by the US government. It was presented by

representatives from UNICEF and USAID officially  at a ceremony in Abuja.

The  AFP reported that  the vaccines had arrived Nigeria on Sunday via two planes.

The Moderna vaccines, which were approved by NAFDAC in July, are expected to boost the country’s vaccination programme.

About  2 ,149  Nigerians have  been killed by the virus   while it has  infected nearly 174,000 in Nigeria, but the real figures are believed to be much higher, in part because of low testing rates

Nigeria had earlier kicked off its COVID-19 vaccination program in April after receiving 3.9 million doses of the AstraZeneca vaccine from the COVAX initiative.

Covax was set up to ensure the equitable distribution of vaccines, particularly to low-income countries, and has already delivered more than 80 million doses to 129 territories.

. The Moderna vaccines, which were approved by NAFDAC in July, are expected to boost the country’s vaccination programme.

The Primary  healthcare agency said last month that Nigeria had exhausted an initial supply of nearly 4 million shots and expects to receive nearly 8 million doses of COVID-19 vaccines by the end of August, including the U.S. government donation.

Nigeria, Africa’s most populous nation, has seen a rise in coronavirus cases since mid July. Some 174,315 cases and 2,149 deaths have been recorded since the pandemic began in early 2020, official data shows.

It recently detected the highly contagious Delta variant, with the health minister warning that the country was going through a third wave of the infection.

Resident doctors in Nigerian public hospitals began an indefinite strike on Monday over grievances that include the delayed payment of salaries and allowances, the doctors’ union said, as coronavirus infections rise.

Also during the same period  the Nigeria Centre for Disease Control said it had detected the Delta variant, putting officials on alert for a third wave of infections in the country.

In June, Nigeria barred passengers who are not citizens or permanent residents from entering the country if they have been in South Africa in the past 14 days.

Meanwhile  32   Delta variant cases of coronavirus (COVID-19) have been reported in five states across the country, the Nigeria Centre for Disease Control (NCDC) has said.

The Director-General of the NCDC, Chikwe Ihekweazu, spoke about this during the resumed briefing of the Presidential Steering Committee on Monday in Abuja. Nineteen of the cases were reported in Akwa Ibom State.

According to him, Lagos, Cross River, and Oyo states as well as the Federal Capital Territory (FCT), as the other places where at least one case of the Delta variant of COVID-19 has been confirmed in the country.

Since the outbreak of the disease that has claimed millions of lives globally, health experts have continued to watch certain coronavirus mutations and variants that have become more contagious and deadlier than the original strain.

Among such strains, the B.1.617.2. (Delta) variant has become a major source of worry in recent times as a result of its rapid increase in several countries, including the United States.

Nigeria is not left out. The Minister of Health, Dr Osagie Ehanire, who was also present at the briefing, raised concerns about the Delta variant of the virus.

He advised Nigerians against travelling to Lagos, Akwa Ibom, Oyo, Cross Rivers, Kano, Plateau and the FCT during this period, except when it was absolutely necessary.

Ehanire explained that it was important for the PSC to discourage such travels because of the surge of the virus within the states of concern.

At the briefing, the United States officially handed over to the Nigerian Government more than four million doses of Moderna COVID-19 vaccines.

Authorities said the National Agency for Food and Drug Administration and Control (NAFDAC) would have to certify the vaccines for use before they are distributed.