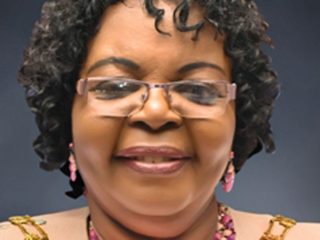 The President and Chairman of Council, Nigeria Institute of Management (Chartered) Mrs Patience Anabor has decried the increasing security situation in the country saying that it would be difficult for anyone to solve the problem without good leadership.

She  said that the institute as a non-governmental body is not under any influence of any government and therefore would continue to  say things the way they are and  advice government but it is one thing to tell the government what is happening and how to solve the problem, it is another thing if your advice is taken.

Anabor said this during a pre-60th anniversary press conference of the Institute and the unveiling of its anniversary logo  and jingle in Lagos. The event was interactive and   part of motley of activities to mark the Diamond Jubilee anniversary  in the third quarter of the year.

She revealed that the institute  use different methods of reaching out to the public: programmes and lectures to inform its  members and non members of what to do about insecurity, infrastructure, and what the  position of the Institute is.

She querried. “How does anyone solve problems without  good leadership? Insecurity didn’t start today, kidnapping didn’t start today. For me it has just increased because we have not managed it properly, and the causes of insecurity are many. Have we addressed them?  “We have poverty, greed and corruption  and all these put together would bring about insecurity and negativity in the system. Therefore as an  Institute of Managemen, we will not shirk our responsibility of addressing the problems as we see it through the best way we know:  education and  information. if you give information to your people and the country as a whole, you are fighting and addressing whatever is wrong with the system.”

She reitereted the determination of the Institute  to continue to fight what it sees as ills of the society through the way it knows how to: education and living the institute’s code of conduct. “If we put service above self, do things in the most effective and efficient manner, you are bound to get best results,  and if there  is no nepotism,  and the system is devoid of favour to anybody, integrity, accountability, fairness, equity, effectiveness,  efficiency and other golden values in place, if we practice them, Nigeria will be great,” she enthused.

She noted that everybody must not be in government to practice those values adding, “If we uphold  them wherever we  find themselves,  when other people see you and the organization you belong, they will  indeed be doing what would make Nigeia great.”

She rated the 20th century managers high saying that they have all the modern tools and are in a better advantage. “We were not thinking of zoom in the 19th century management era but now, it has become a common place. We can communicate better because we have it at our disposal. Technology has come to help us. If COVID-19 had happened in the 19th century ago, I don’t know if we would have been alife to do what we are supposed to be doing now. Inspite of the negativity that we have in the society, the 20th century managers still have a lot to be proud of. ”

She disclosed that  NIM has come a long way  on its  impact on Nigeria. “But unfortunately, Nigeria with over 200m population, we cannot say the impact has been felt by each and everyone of our leaders.

On the forthcoming anniversary, she said,. “The virtual unveiling of the anniversary logo and jingle by Dr John Momoh, Chairman/Chief Executive Officer,  Channels Television is the first of the series of events lined up to mark the Diamond Jubilee. The anniversary celebration which centres on Management Excellence will be headlined by two major events; anniversary lecture and luncheon . The theme of the anniversary lecture is  Celebrating 60 Years of Management Excellence: Poised for More. It is expected to be delivered by Dr. Ngozi Okonjo-Iweala, a renowned Developmental Economist, Nigeria’s former Minister for Finance and the current Director-General of World Trade Organisation (WTO) while Dr. John Momoh, OON, MPON, Chairman/CEO, Channels Television, will be one of the discussants.

“In the past 60 years, the Institute has made a lot of gains in the quest to bequeath an enduring professional management practice to the nation and with about 200,000 individual and 400 corporate membership strength that cut across all professions made up of high networth professionals and blue chip organizations, it has grown to become the foremost, largest and biggest multidisciplinary professional management institute in Africa.

“Since the core mandate and Key Business Indicator (KBI) of the Institute is capacity building especially in the areas of management and leadership development, the Institute has been in the forefront of capacity building in the critical sectors of the nation’s economy. The Institute has done very well in this direction as it has successfully delivered professional management, capacity building, consultancy, re-engineering and human capital development solutions to many organisations in public and private sectors of the economy which it collaborates with both locally and internationally. It has been involved in providing workable roadmap to Government in solving issues of governance through its numerous public advocacy programmes and activities.”

She rated the 20th century managers high saying that they have all the modern tools adding that with these tools, they are in a better advantage. “We were not thinking of zoom in the 19th century but now, it has become a common place. We can communicate better because we have it at our disposal. Technology has come to help us. If COVID-19 had happened in the 19th century ago, I don’t know if we would have been alife to do what we are supposed to be doing now. Inspite of the negativity that we have in the society, the 20th century managers still have a lot to be proud of. ”

She noted that the gap between private and public sector in terms of organization is narrowing adding that even in the institute’s membership both private and public, “We learn from one and pass what we have learnt to  the other. But I must say the private sector is still a lot more organized because they are more profit oriented, and efficient. If government can take a cue from what the private sector does well, I think things will improve.”

On what can be done about brain drain and human capital flight, Anabor said.  “Unless you are comfortable where you are, satisfied with what you do, the environment is conducive and you are rewarded not just by money but also other incentives they way things are done, there would be no need for capital flight rather it will reduce.  “The major problem in the country is poor management of our infrastructure. We can see right things happening abroad  copy and replicating them when we come back. It will help the country’s developement. I’m very certain that Nigeria is blessed with many capable people who can do grand thing  right if given the opportunity.  if we follow best practices and do things right, I don’t think corruption will have  plenty of room, but to say  we are eradicating it may not be realistic. it is still a long way to walk, so let us reduce it in our own little way by everybody doing things the right way then corruption will fly off.”

Chairman of the anniversary committee and former President of the Institute Dr. Micheal Olawale Cole in the light of the  theme said it was very apt and resonates with the ethos of professional management adding that  “It is the desire of the Institute that this anniversary celebration will lend a voice to the call for managerial excellence through identified best practices across the length and breadth of our dear country.”

He said that the Institute has a lot of responsibility to sell its code of conduct to the Nigerian public and  those who are either in private or public offices. “If only it takes Nigerians who are in government or leaders in private sector to observe our code of conduct and keep the values we share at the institute, this would be a different country. What we’ve been advising government and leaders in the  private sector  over the years is the need to do things right, for that is the only way our nation can make progress.

He appealed to the Institute to continue to urge government and the private sector of the need to  do things properly. “A number of us would blame those who are in government but are we also doing better in the only area where we are in charge?” he asked.noting, “The truth is that we are not making good progress. The  moment in any country when lives are no longer safe, that country’s leaders would need to know that it calls for them to ask,  “Where have we  got it wrong?”

The Registrar/Chief Executive Officer  of the Institute Mr Tony Fadaka  in his reaction vowed  that the institute would not be seen in the media criticizing government. He said  that the Institute has what he called  ‘Position Paper’ in all the sectors of the economy which it ensured got to the  relevant authorities: The Presidency and the various ministeries.  “So we have been talking and will continue to talk and make our position papers known while working for the good and improvement of Nigeria. However, there is a limit to which we can talk to government because we cannot force them. We have series of  training and our capacity building is one of the best in the country. It cuts across risk management and corporate governance. When we  invite them both free and paid, they come but unfortunately, when they go back, they don’t really practice what they have learnt.  So, it is both leadership  and people problem which call for introspection.”