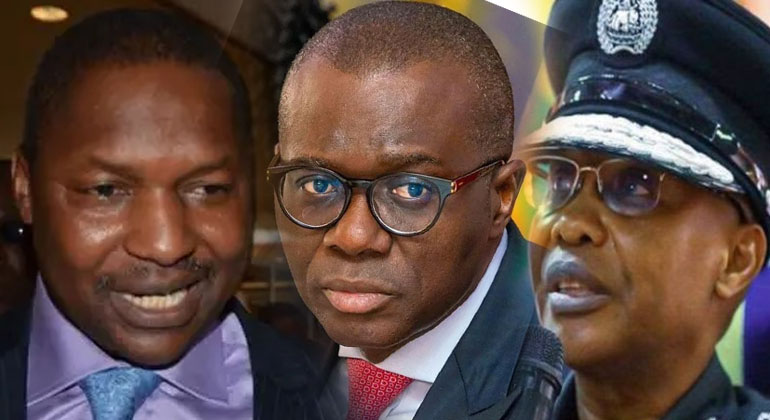 A  Chief Superintendent of Police on Tuesday openly defied all the entreaties by the  Lagos State Governor, Babajide Sanwo-Olu, to vacate the Magodo Phase 2 Estate area of the state.

He said he and his armed colleagues were at the estate on the orders of the Inspector-General of Police, Usman Baba; as well as the Attorney General of the Federation, Abubakar Malami (SAN).

The governor who led members of his cabinet to visit the residents protesting the continuous presence of armed at the estate for some days now.

For days, policemen besieged the estate in the company of suspected land grabbers and members of a family who had planned to demolish property in the choice estate to execute a Supreme Court judgment. The development has created a lot crises in the estate as landlords and tenants panic over their fate.

It was for this reason that the residents had to call on the governor to intervene and Sanwo-Olu visited the scene on Tuesday and told the leader of the police delegation that the land matter was a case between private individuals and the state government.

Sanwo-Olu said, “Can you call your superiors in Abuja and tell them that the governor is here and as the Chief Security Officer, you don’t have any business being in my state right now and that I want you to disengage right now?”

But the CSP replied, “I am here on the instruction of the Inspector General of Police through the AGF. I am too small or too low to call them. Your Excellency sir, you can call them sir.”

Asked of the number of policemen at the estate, the defiant leader of the police team told the governor, “My men are here; they are all over the place, I cannot precisely tell you how many we are. For security purpose I cannot tell you the number.”

When the governor could not convince the CSP,  he then turned to journalists and declared the presence of the policemen as illegal, adding that he would make some calls to the IGP and the AGF.

“The policemen are not from the Lagos State Police Command. They said they are from Abuja. I don’t know what other interest they have beyond keeping the peace of the country. This is not an expectation that I expect from them because they don’t have any business here.”

While addressing journalists and aggrieved residents of the estate later, he appealed for calm, said a meeting had been scheduled with the judgment creditors on Wednesday, adding that representatives of the association and the police would also be involved in the meeting.

The management of Magodo Estate had yesterday ordered the closure of the estate gates in protest against the planned demolition of property in the estate.

Recently, the policemen accompanied suspected land grabbers and members of a family who invaded the estate to claim possession of property.

During the invasion, the group used red, brown and blue inks to inscribe ‘ID/795/88 Possession Taken Today 21/12/21 by Court Order,’ on various properties on the estate.

The suspected family were said to have led the group and armed policemen to the estate to execute a Supreme Court judgment.

The group was about to invade the estate with a bulldozer when the estate management ordered a closure of the gate.

It took the intervention of the Governor, Babajide Sanwo-Olu before the gates were reopened as the Inspector-General of Police, Baba Usman, promised to withdraw the policemen.

the Lagos State Government then had described the invasion as unwarranted and vowed to prosecute those involved in the invasion.

The Legal Adviser, Magodo Residents Association, Tunji Abdulhameed, while countering the judgment claim influencing the actions of the invaders, said there was no specification to the area, property, location of the plots of land in the judgment they got in 1993

He added, “But for you to execute even when you get a judgment, you must still apply for a writ of possession and without it, you cannot enforce the judgment. So, when they applied for the writ of possession and it was approved, we challenged it and that was the time the residents association joined the case as we were not part of the case before they got the judgment.

“The essence of the closure of the gate was to create awareness to the public and to draw the attention of the government as to what is happening in Magodo so that we can get protection from them.”

“The people that have come said they have Supreme Court judgment, rightly so, the residents living here have proper title and a means to live here and of course the Nigerian Police.

“In the car, I had spoken extensively with the IGP and with the honorable Attorney-General and we have resolved all of the issues. What we will see is that there would be a total stand-down and tomorrow, around 11am, we will be inviting the representatives of the judgment creditors.”