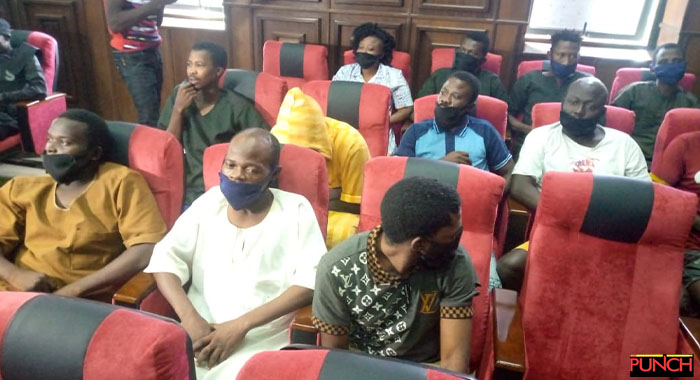 A Federal High Court sitting in Abuja has granted bail to the 12 aides of Sunday Adeyemo popularly known as Sunday Igboho.

Delivering the ruling on the application filed by the 12 applicants before the court, the presiding Judge, Justice Obiora Egwuatu, said it is clear that no charge has been brought against Sunday Igboho’s aides since their arrest.

As such, the court held that detaining them without charging them contravenes the provisions of the Administration of Criminal Justice Act and their fundamental rights.

Eight of the applicants, the 1st, 3rd, 4th, 7th, 8th, 9th, 10th, and 11th applicants, were granted bail in the sum of N5million each with surety in like sum resident in Abuja.

The remaining four applicants, the 2nd, 5th, 6th, and 12th applicants, were granted bail in the sum of N10 million each with two sureties in like sum also resident in Abuja.

for admitting the four applicants to bail is that one of the two sureties must be a Federal Government employee not below grade level 12.

The two sureties must also present evidence of three years’ tax payment and the document of their property must be verified by the DSS and the court.

The 12 applicants are however to remain the custody of the DSS until they are able to perfect all conditions for their bail.

Although counsel to the applicants, Pelumi Olajengbesi had prayed the court to grant an order for them to be moved to a Police facility, experiencing fear of a possible manhandling by the DSS, Justice Egwuatu refused to grant the prayer as he said he had not seen any reason to grant it.

The aides were arrested when DSS officials raided Igboho’s home on July 1, but a lawyer to the apprehended aides, Pelumi Olajengbesi, has sued on grounds that their fundamental human rights were being infringed on.

The DSS earlier on Monday, August 2 presented eight instead of the 12 arrested aides.

The court then ordered the  security agency to produce all the 12 aides.

In obedience to the court order, the DSS on Wednesday produced all 12 detained aides before the Federal High Court in Abuja.

The DSS had paraded the aides on July 1 and accused them, along with Igboho, of stockpiling arms to cause chaos in the country.

Mr Igboho rose to fame after issuing a quit notice to herders in the south-west over increasing violence.

He has also advocated for the creation of a Yoruba Nation out of Nigeria.

After the DSS raid on his home, Mr Igboho fled to Benin Republic and is presently in court fighting extradition back to Nigeria.

← Tinubu Not Sick, Not Hospitalised – says  Sanwo-Olu Lagos Want Measures Put In Place Against Mental Illness in Over 50m Nigerians →