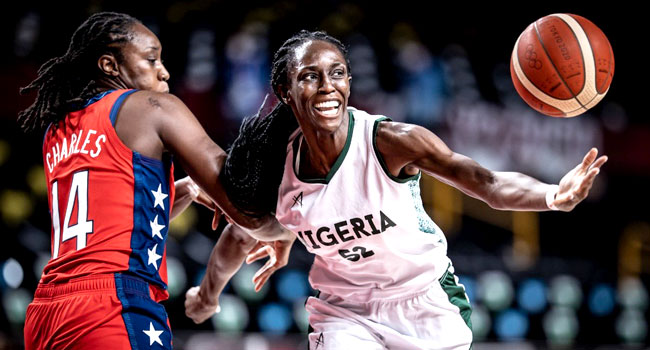 The United States Women’s basketball team have extended their Olympics winning streak to an incredible 50 games, although they were forced to labour for it against an impressive and determined Nigerian team.

According to Channels Television, Nigeria’s D’Tigress lost to the U.S. team 72-81 in the preliminary round Group B opener at the Saitama Super Arena in Tokyo.

The result confirmed Team USA has been flawless since the 1992 Summer Games in Barcelona. It was not a pretty performance by the Americans, but they managed to get the job done.

Team USA won the third quarter 26-18 and got a little lackadaisical towards the end of the fourth quarter and the D’Tigress took control, dominated the match, and won it 22-11 to narrow the winning margin by just nine points.

‘Next Game Will Be Better’

Just last week, in an exhibition game in Las Vegas to prepare for the Olympic Games, USA humiliated Nigeria 93-62 points and D’Tigress coach, Otis Hughley, can use the latest result to motivate his team ahead of games against France and Japan.

At the post-match briefing, Hughley admitted he would have preferred playing another team in the openiing game.

“It’s like starting your boxing career and they tell you you’re fighting Muhammad Ali (USA) in his prime. Now that is not something you’re looking for. ‘I want to box, but I don’t want to box that bad’” he said.

Nigeria’s Minister of Youth and Sports Development, Sunday Dare, said he was so proud of the Nigerian ladies and their performance despite the outcome of the game.

“I watched the game from the start to the end. Every moment. I saw players who can fight, and they fought.

“From 20 points disadvantage, they climbed back steadily, the height and built of the Americans notwithstanding. The next game will be better. I trust them. Going up against the Americans as they did, our team is good and can be better,” he said.

Nigeria’s D’Tigress will be back on the court on Friday for their second Group B match against the French team.